A few years ago, Victory siezed on the trend of the day and put out a Brettanomyces laced version of their flagship IPA. The result was Wild Devil, a beer I remember enjoying, but truth be told, I had no idea what Brett was or what it was contributing to the finished product. As I got up to speed with wild ales and sours, this beer mysteriously disappeared off shelves, victim of the same capacity issues that plagued Old Horizontal and a few other Victory rarities. Well, now that Victory’s new production brewery in Parkesburg is up and running, we’re starting to see the return off these excellent, but more time intensive beers . I was very curious to see how my more Brett attuned palate would react to this beer. I’m happy to report that is as good as ever. It’s not going to fetch you any interesting brews on a trading board or anything, but it’s an interesting and worthwhile take on an old classic: 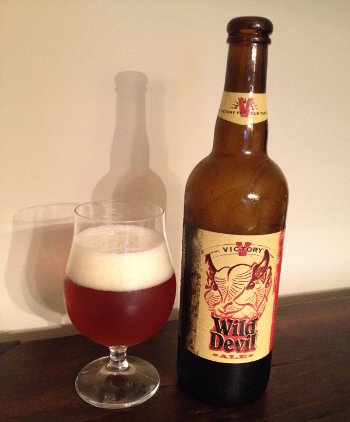 Victory Wild Devil – Pours a clear amber orange color with tons of billowy off white head that leaves lacing as I drink. The aroma has a very nice, well matched funk to it, lots of earthy aromas mix with the typical floral hop and bigger-than-typical malt character of Hop Devil. Taste follows the nose, very nice earthy, barnyard funk shows up right away and lasts pretty much throughout the taste, but there are plenty of dank citrus and pine hops in the mix along with some sweet crystal malt character, and your typical IPA bitterness in the finish. Mouthfeel is highly carbonated and medium bodied, only a moderate Brett presence, but enough to add a twist. I find that Brett IPAs can sometimes feel a bit muddled, but Victory has found an excellent balance here. Overall, the Brett adds a welcome dimension of complexity to an old standard, and it’s even better than I remember it. A-

I am curious to see how this sort of thing would last over time, and it seems like a good sort of beer to have laying around, just in case. I meant to grab myself a regular HopDevil to compare, but it turns out that this was not necessary, as the Brett, while mild, was immediately noticeable. I’m long overdue for a trip to the brewery. It used to be a regular stop, but I’ve fallen out of the habit and have been patronizing some other locals in its place (which has its own benefits, to be sure!).