I’ve observed on many occasions that my eyes are bigger than my liver, and thus I have a lot of beer laying around the house. As such, when friends stop by, I’m more than happy to throw open the fridge and drink whatever they want. I’m always glad to share, until I get to a beer like this, and I realize that my generosity has truly failed me! I suspected as much as soon as I saw what was in the fridge. I know from previous experience that Cisco’s The Woods series are fantastic, and of course it was the brew chosen. I wrangled a solid 8 oz pour, which was certainly enough to know that I really wanted those other 16 ounces (I pretty much know from the first sip, actually). Sharing is caring, but sometimes that backfires.*

Cisco is a fine brewer, but the beers in The Woods series are far and away the best things I’ve had from them. Both examples that I’ve had have been spectacular. This one, a sour ale aged in barrels with peaches added, is no exception. I really must snag some more of these beers when I can… 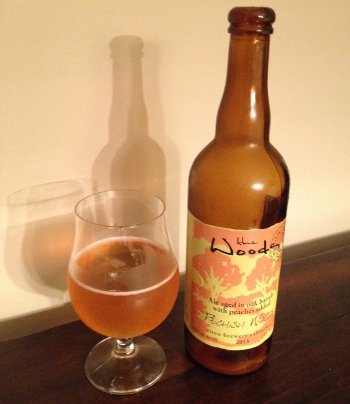 Keep an eye out for The Woods folks, I know I will, and they’re worth the stretch.

* I am, of course, being facetious here. While I would love to drink more of this beer, I was really happy I got to share it with friends.