I’ve heard very good things about these Netherlanders and even had some good first hand experience with their stuff, so when I saw this Imperial Stout aged in Jack Daniels barrels sitting on the shelf (it was a bit of an oddity, as this bottle was right next to some more Imperial Stout, but with a slightly different label – it took me a few moments before I noticed the little “Jack Daniels Barrel Aged” sticker on the side of the label), I figured it was worth a stretch. Emelisse has actually done a series of IRS beers, all with different hop or barrel treatments under their “White Label” banner, but this one seems like its own thing. I’m actually surprised we don’t see more Jack Daniels barrel treatments out there in the beer world, as it’s the most popular American whiskey brand and I believe it has the same secondary market of bourbon barrels… On the other hand, I didn’t love this beer. Its not bad at all, but when it comes to BA stouts, its got a lot of competition! 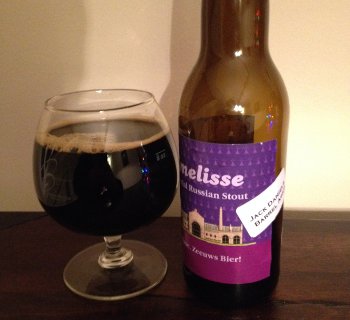 Emelisse Imperial Russian Stout – Jack Daniels Barrel Aged – Pours a very dark brown, almost black color with a slow forming but relatively long lasting brown head. Smells very whiskey forward, though I’m getting some sweetness and maybe a hint of roast from that beer base too. Taste is very sweet, again also barrel forward stuff here, lots of whisky and oak char, not a ton in the way of roast or caramel, but tasty nonetheless. Mouthfeel is a little on the thin side for a BA stout, but it works well enough and it’s still on the upper end of medium bodied. A little light on the carbonation though, and the boozy heat comes through pretty strongly. Overall, this is a decent BA stout, but there were a couple things holding it back from true greatness for me. B

I’d still be curious to try out some of their White Label versions of this beer, though perhaps expectations will be calibrated a bit lower. For whatever reason, I was expecting a lot more out of this than I actually got…