’tis the season for beer gifts. I arrived at work the other day to literally, like, 5 bottles of beer on my desk. Gotta love my coworkers (and of course I reciprocated said gifts)! Later in the day, I participated in the office White Elephant and ended up with another six pack (I didn’t steal it and swear I didn’t pick it thinking it was beer). Incidentally, my contribution to the white elephant was a 40 of Olde English (with a gift card tucked into the bag). It got stolen once, and the guy who stole it didn’t even know about the gift card. Score.

Anywho, this here was one of said gifts, and it certainly has a very nice presentation. Waxed cap, bomber sized with a classy and beautiful label that nevertheless retains Terrapin’s branding feel (which is tough, because I generally hate their labels), but as per usual, it’s what’s inside that packaging that counts, right? In this case, we’ve got a variant of Terrapin’s normal winter seasonal, a milk stout called Moo-Hoo. Like the base, this one has fancy schmancy cocoa nibs and shells and is dosed with lactose. This variant also incorporates white chocolate into the mix in some way. Color me interested: 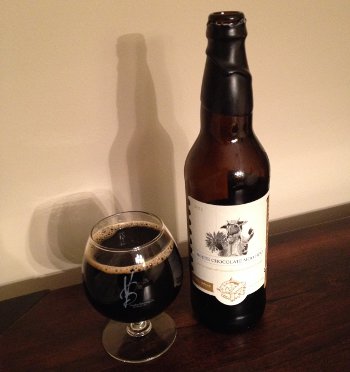 Terrapin White Chocolate Moo-Hoo Milk Stout – Pours a very dark brown color with half a finger of quickly dissipating light brown head. Smells great, lots of sweet, rich milk chocolate (maybe white chocolate, though I probably wouldn’t guess that blind), some caramel, hint of vanilla, light roast. Taste definitely has that lactose sweetness, very light roast, not quite as complex as the nose implied, but still tasty. Mouthfeel is a little too thin for what it is, but its very smooth and velvety. Overall, its a fine beer, not quite as thick as it should be, but very tasty. B

I’ve actually not had the base beer, so I can’t say how it compares, but some seem to think it’s basically the same. Terrapin has never particularly floated my boat, but I can’t say as though I’ve had a really terrible experience either…

Posting will probably be light this week, for obvious reasons. Merry Christmas to those of you who are celebrating this week!