Yet another Bourbon County variant, this one is new this year, though it appears to share a certain kinship with variants of years past (for example, last year’s Cherry Rye). It looks to be the same base stout, but instead of Bourbon barrels, they use Templeton Rye barrels, and then they add in a 50 pound dose of puréed mulberries, marionberries, and boysenberries to each barrel. According to the Chicago Reader, 200 barrels were filled (which, while still a lot of beer, is significantly less than the 1400+ barrels used for regular BCBS). So what I’m saying here is that this should not only have berry notes, but it will also taste more rare than regular BCBS (and maybe slightly more rare than BCBCS). And we all know how good “rare” tastes, right?

To be honest, I’ve never had a mulberry, marionberry, or boysenberry (though I get the impression that there is some relation to blackberries and raspberries for some of these, which I have certainly had), but while I do like me some berries, I can’t say as though I really love them in my stouts. Sour beers? Sign me up. Fruited stouts? I can’t say as though I’ve had many, but they haven’t exactly inspired me either. However, if one beer could turn me around on this, I suspect it would be this one. After a long Christmas Day, I plopped down on the couch and cracked this sucker open (berries are holidayee, right?) to find out: 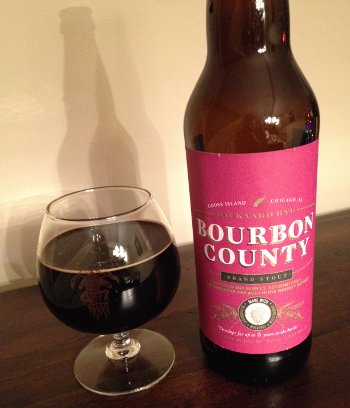 Goose Island Backyard Rye Bourbon County Brand Stout – Pours a very dark brown, almost black color, with a thin cap of bubbly light brown head that quickly resolves into a ring around the edge of the glass. Smells of rich caramel, vanilla, whisky, with a very prominent syrupy fruit aroma. Taste is very sweet up front, some rich caramel, whisky, vanilla, and oak, but nowhere near as much as regular BCBS, and that syrupy berry character comes on strong late in the taste and lasts though the finish and aftertaste. That syrupy fruit is kinda hard to describe. It’s not quite cough syrup (something I’ve seen in other fruited stouts) and it’s not bad, per say, but I’m not sure I’m entirely on board with it either. Mouthfeel is full bodied, well carbonated, with some boozy heat. Not quite the monster of regular BCBS (or even BCBBW or BCBCS), and while it has a nice richness to it, it’s decidedly less substantial than other variants. None of which is inherently bad, but these tend to be my favorite aspects of a barrel aged stout. Overall, what we have here is a fantastic fruited stout, probably the best I’ve ever had. That being said, I still greatly prefer straight up BCBS. In truth this is my least favorite variant. That doesn’t make it bad, it’s just that BCBS is so spectacular that this isn’t really working for me. This is probably a personal preference thing though, as everyone else seems to love it. Go figure. B+

So my favorite Bourbon County beer remains the original, straight up BCBS. Of the variants, my favorite was the Barleywine, but only because I’m not a big coffee guy – if I were, that explosive coffee character in this year’s fresh BCBCS would knock my socks off. Backyard Rye is certainly a fine beer and I’d never in a million years turn it down, but expectations were perhaps too high here. There are some other variants floating around this year, but they’re Chicago-only brews that I’m unlikely to try (which is a shame, as Coconut Rye sounds like it could be up my alley, and it seems to be pretty popular). So I’ve got a nice stash of Bourbon County beers that will hopefully last me the rest of the year, though at this point, I believe I’ve reviewed them all.

Posting will continue to be light this week, again for obvious reasons. Have a great (and safe) New Years everyone!