Every year, I buy a six pack of Anchor’s Our Special Ale, their Christmas beer, but I never drink all of them. I always reserve 3 or 4 bottles to try in the following years. This year marks the first time I managed to wrangle bottles from three separate vintages in one tasting. And if I keep the tradition going, I might be able to swing four varieties one year. Oh sure, the recipe changes each year (along with the label and the tree depicted on such), so it’s not a true “vertical”, but it’s an interesting and fun experience anyway, amirite? Of course I am. I’m awesome. So let’s get this party started: 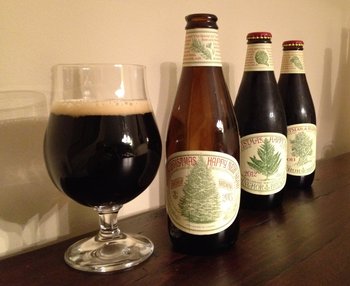 Anchor Our Special Ale 2013 (Anchor Christmas) – Pours a deep, dark brown color, maybe the faintest of hints of amber when held to the light, and about a finger of off white head. Smells full of those standard mulling spices, cinnamon and clove seem very prominent, but some other usual suspects seem to be hanging around as well. Taste follows the nose, lots of spice up front, with the sweet malt backbone filling in the middle, and the spices return for the finish, which also has a light, almost dry bitterness (nothing like an IPA or anything, but this isn’t super sweet either). Mouthfeel is smooth with a spicy snap, well carbonated, and a relatively dry finish. Overall, it’s another rock solid entry in the longstanding series… B+

Anchor Our Special Ale 2012 (Anchor Christmas) – Pours a very dark brown color, almost no amber even when held to light, with a finger of dense, creamy looking head. Smells oddly muted, typical spices are there, but not as prominent as it was fresh (or as the other vintages). Taste is similarly faded when it comes to the spices, but the malt picks up a little slack, keeping it interesting enough. As it warms, I’m getting a little more of the uncommon spices (anise?) Mouthfeel is smooth, well carbonated, a little thinner than 2013, but still medium bodied. Overall, it’s decent, but not as good as it was fresh last year, nor as good as the other vintages I had tonight… B

Anchor Our Special Ale 2011 (Anchor Christmas) – Moar dark brown beer here, finger of off white head. This nose seems to have held up better than the 2012, lots of spice, and maybe even a nice sugary component. Indeed, I think this nose is just as good if not better than the fresh 2013 juice. Taste also held up well, plenty of spices, and they’re more harmonious here than in 2012 or probably even 2013. Mouthfeel is smooth and crisp, medium bodied, highly drinkable. Overall, this has held up remarkably well. It’s not a religious experience or anything, but it’s still really good, and definitely my favorite of the night. Go figure. B+

So there you have it. You see? I don’t drink barrel aged face melters every day… Though, um, I did have one later this night, which we’ll get to next week. See you then.