La Cabra Brewing is one of several local “breweries-in-planning” that have been cultivating a grassroots following before they’ve even opened. Located in Malvern, PA, brewer Dan Popernack has been busy crafting his lineup of beers and readying his brewery for the big time. Since the brewery isn’t official yet, Popernack can’t sell his beer just yet. Nevertheless, he maintains a small email list that he notifies whenever he has a beer available, and folks go and pick up samples of his beer. His operation seems to be picking up steam as of late, with a profile in a recent Joe Sixpack article as well as reviews on RateBeer and other social media. I had the good fortune to try Brettophile and Peter recently and was so impressed that I thought it would be interesting to pick Dan’s brain in an interview. So I sent over a few questions and Dan graciously sent back his responses, which are reproduced below. Cheers!

Kaedrin: La Cabra hasn’t even opened its doors yet, but it’s already established a good reputation via word of mouth and various social media, like RateBeer.com and Untappd. Why do you think La Cabra has struck such a nerve?

Dan: I always let the beer do the talking and I only put out products that I’m proud of. There are a lot of small guys making great beer but I’ve let my more exotic beers be my calling card. I would also be remiss if I didn’t give a shout out to my art guy…Matt Flail (www.misterflail.com) is an incredible local artist and his eye-catching, unique and downright sexy art helps people remember the brand. Between the liquid and the optics, people who try La Cabra know that a great deal of thought and care goes into our beer.

Kaedrin: Did the mailing list emerge organically, or was it a deliberate attempt to get feedback and publicity? Has the Joe Sixpack article lead to tons of new requests for inclusion (like, uh, mine)?

Dan: I’ve been inundated with requests since the Joe Sixpack article and welcome the new faces (like, uh, yours.) My mailing list has always been a way to share my work with as many people as possible in the hopes that they will keep tabs on what I’m up to. As I start to turn my eyes towards opening a spot, I hope that these folks will consider getting involved whether as investors, supporters, rah-rah people, or just come in and enjoy a beer.

Kaedrin: What’s the one La Cabra beer that you feel will put your brewery on the map, and why?

Dan: I believe that a brewery has to be careful in balancing being “on the map” for certain beers and creating a solid portfolio that people can consistently get their hands on when they want it. The breweries that I tend to appreciate and model my thinking after may not always make the most mind-blowing, super-exclusive beer. But you do know that anything they put their name on will be enjoyable, solid, and carefully made. That being said, I believe that Brettophile will always be a special beer for me and will continue to serve a core purpose for the brewery. Even on an operational level, Brettophile serves as an inoculate beer for all of my barrels so it establishes my “brewery taste” even before being bottled and sent out on its own.

Kaedrin: Are you planning on having a regular lineup with the occasional special release, or will you be focusing on one-off brews? Will you have a “flagship” beer that’s always available while those funky sours sleep in their barrels?

Dan: Because I would like to….umm..make money…I will always offer a range of accessible beers for everyday drinking (which I wholeheartedly endorse.) I tend towards saisons and small beers but also brew American Pales and IPAs. Cassiopeia (amber Kolsch) and Castor and Pollux (small saison with lavender and orange blossom honey) are the kinds of things that I like to drink while I’m waiting for those “funky sours [to] sleep in their barrels.” My Belgian pale (Delphi) and APA (Leon) will always be on tap.

Kaedrin: Brettophile and Peter are both fantastic, can you tell us a little more about both of these? What yeasts were used, how long were their stays in barrels, that sort of thing…

Dan: Both are aged between 6-8 months in American oak. I use fresh charred barrels so that I know exactly what microbes, yeasties, etc. are in there. Brettophile is a very basic Belgian strong recipe with a little maltodextrin (sometimes) and wheat, fermented in stainless steel then aged in oak with my blend of Brettanomyces. Peter is a Belgian brown with rye fermented with two different Belgian strains then aged in barrels with a mix of Brett., Pedio., and Lacto. I don’t usually pitch fresh Pedio and Lacto since the barrels already have a good microflora. The trick is creating a good barrel then feeding it good beer. And waiting. 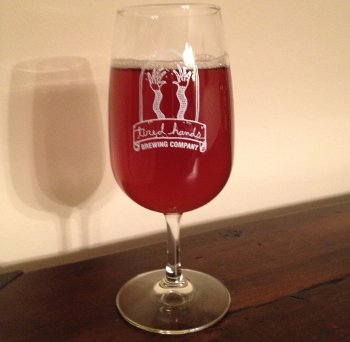 Kaedrin: Your barrel aged brews seem to favor the the wild and sour side. Do you have any plans to do less funky barrel aging, like a Bourbon barrel treatment?

Dan: For a guy who drinks as much beer as I do, I’ve never really enjoyed the taste of alcohol. I’ve had mixed results (to my taste) with port barrels on a project with a local brewery and think that my beers don’t play well with booze. However, once I have a good library of sour barrels built up, I would most definitely be interested in putting some RIS in a barrel to mix things up. My wood budget is all spent up on fresh barrels…but I have been looking at Dad’s Hat Rye barrels recently…

Kaedrin: What’s the story behind the name “La Cabra”? Obviously goats are involved, but in what capacity?

Dan: I teach Spanish full time and so my names and brand always have a little Latin-persuasion. I’ve always liked goats’ attitude. At the risk of anthropomorphism, I’ve always felt like they are independent, rugged, and endearingly crazy. My undergrad and graduate degrees are in English so I’ve always kept a mental log of mentions of goats in literature, art, etc. I can decidedly say that they are almost universally associated with a good time. In all the most wholesome ways, of course.

Kaedrin: Establishing a new brewery from the ground up is a huge undertaking – about where are you in the process, and how long until La Cabra can officially start selling its wares?

Dan: I’m not putting out a date yet as I have a lot of moves to make before then. However, I have spent the last 10ish years planning this endeavor and picking the brains of some very enlightened beer folks. I’ve learned where my priorities need to rest in order to be financially successful and also learned some of the pitfalls that brewers succumb to. It’s an excellent, brick and mortar industry full of innovative, collegial, and good-hearted people. I’m not rushing in at the peril of my brewery but I will be ready when the opportunity presents itself.

Kaedrin: You describe La Cabra as a nanobrewery in the planning. Are you looking to remain small, or do you have grander expansion plans? In other words, what’s your dream brewery?

Dan: At the moment, my concept is moving towards a brewpub. I would like to pair my beers with simply prepared, earthy pan-Latin food in a non-pretentious, accessible environment. One of La Cabra’s core principles is that beer and food should be seasonal, occasional, and always enjoyed with friends. Customers can always expect novel, rotating offerings (in beer and food) but know that we’ll offer a consistent and comfortable experience. I have a few “brand specific” tricks up my sleeve to make La Cabra Brewing a truly unique beer destination but would prefer to roll those out on opening day.

A long term goal is to expand to a production scale and send sour beer back to California and Belgium. But first I intend to support the local beer scene and offer patrons an experience that they’d be proud to have in their community.

Kaedrin: Finally, what are the non-La-Cabra beers that that have given you inspiration? Are there any new local breweries that you’re excited about, or old favorites that still have that magic?

Dan: I really need to make it to Michigan on a beer trip. Among the breweries that have made it a great beer state, Founders and Jolly Pumpkin encompass the blend of consistency, innovation, and no-nonsense beer that La Cabra will always offer.

On a local front, Forest and Main stands out as a great idea of what the La Cabra brewpub will “feel” like. I love the warm, quietly charming vibe there. The beer is always awesome, the food always tasty, and the staff is always welcoming. Great place that I love visiting with friends.