To state the blatantly obvious, I’m a beer guy. But I don’t exclusively drink beer. After the Scotch de Silly debacle last week, I poured myself a glass of Port wine. I know very little about wine, but I enjoy a glass on occasion and could see myself exploring that world with the same enthusiasm as I have for beer (someday, but not today). And I will often start a night with a couple beers, but finish with a dram of scotch or, lately, bourbon.

Even if you’re only into beer, I think you’ll recognize that Pappy Van Winkle seems to have the reputation of “best Bourbon in the world”, as evidenced by the “ermegerd Pappy” reactions surrounding beers aged in old PVW barrels (you can see some nerding out over PVW and barrel selection in the comments section of my Buffalo Trace BBVD review). But if you think the insanity around PVW barrel aged beers is excessive, just try to find youself an actual bottle of Pappy Van Winkle. Since it’s got that reputation as the “best”, everyone who wants to get into whisky (and apparently everyone does these days) tries to get themselves a bottle. Most liquor stores have waitlists with thousands of names on them, but they only get allocated a handful of bottles a year. Auctions, raffles, secret handshakes, these are tough bottles to land.

So why am I babbling about Pappy when this beer was aged in Old Fitzgerald barrels? Well, it turns out that Old Fitz was the original Pappy. For years, Old Fitzgerald was made at the now-defunct Stitzel-Weller distillery, which just happened to be where Julian “Pappy” Van Winkle toiled away at the art of Bourbon (legend has it that the distillery sported a sign that said “No Chemists Allowed”). If you ever find a bottle of 1970s era Old Fitzgerald, well, you’ve struck gold. Of course, that distillery is closed now, the Van Winkle family kept their own brand, and the Old Fitzgerald label was sold to Heaven Hill.

So far, I’ve loved all of FiftyFifty’s Eclipse stouts, each variant aged in barrels from different expressions of whisky. This marks the fourth variant I’ve had, and while they’re all uniformly excellent, there are some big differences between the variants. My two favorites, the Rittenhouse Rye and Elijah Craig 12 variants, are very different. The EC12 retained a lot of stoutlike character and roast, while the RR went the super rich direction, huge caramel and vanilla barrel character. Evan Williams came somewhere between the two, but perhaps leaning more towards the EC12 in terms of its flavor profile. And now we have Old Fitz, which isn’t at the extreme of the RR, but leans that way. Let’s take a closer look: 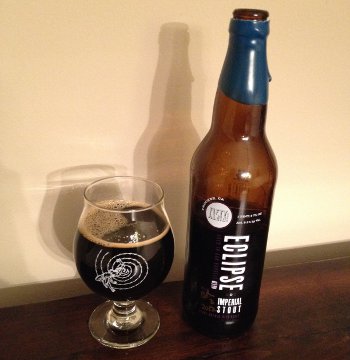 FiftyFifty Imperial Eclipse Stout – Old Fitzgerald – Pours a deep dark black color with half a finger of tan head. Smells of bourbon, oak, vanilla, and caramel, quite nice. Taste is filled with rich caramel, with that bourbon, oak, and vanilla powering through the middle, with a bit of roast emerging towards the finish (not as much as Elijah Craig or Evan Willaims, but more than Rittenhouse Rye). Mouthfeel is a little less carbonated than I remember from the other variants, but we’ve otherwise got the same profile. Full bodied and rich, it’s not a monster, but a well balanced sipper. Overall, another fantastic entry in the series. I cannot wait to crack into some 2013 variants, assuming I can get ahold of them! A-

So one caveat to my comparative results is that I never had any of these side by side. If my local beermonger gets more of these this year (including, ermegerd, a Pappy variant), I’ll try to put together a comparative tasting or something. My wallet won’t appreciate it (these are pricey beers), but I think it would be a lot of fun.