Last year, the Brewers Association estimated that the number of breweries-in-planning had surpassed 1300. I’d wager that a sizeable portion of these are paper tigers that will never actually see the light of day. Others, though, have been building an underground following with their homebrewed beers. One such operation is La Cabra Brewing, out of Malvern, PA (just a hop and skip away from Kaedrin HQ), where brewer Dan Popernack has been busy dialing in his portfolio and building up his fleet of barrels. Since La Cabra is not federally licensed as a brewery, he can’t actually sell his wares, but he does maintain an email list and periodically releases beers for feedback purposes. I have been fortunate enough to procure a couple of these brews. A few weeks ago, Joe Sixpack published an article focusing on a few local breweries-in-planning, including La Cabra, and I hope to have an interview with Dan in the near future, so I’ll leave it at that for now. You’ll be hearing more about La Cabra soon!

In the meantime, let’s check out one of these beers. Brettophile is a golden ale fermented entirely with Brettanomyces and aged in new American oak. My kinda beer, so let’s see how it turned out: 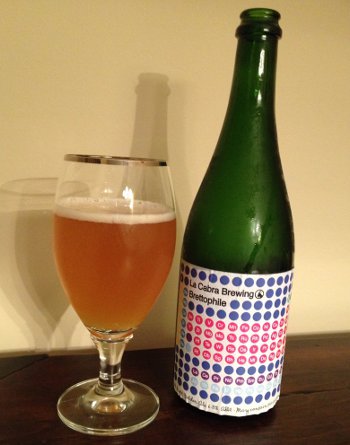 La Cabra Brettophile – Pours a very pretty, almost radiant golden orange color with a finger of white head. Smells full of Brett funk, mild barnyard, earthy with a big dollop of fruity esters. Taste starts off with some earthy barnyard funk, a hint of spice, with a noticeable oak character pitching in towards the middle, and a juicy tartness that starts in the middle and intensifies through the finish. The sourness opens up a bit as it warms, lemons and pineapple, but it’s still very well balanced. Mouthfeel is well carbonated, crisp, refreshing, with a pleasant pucker factor from the sourness. Overall, this sucker could compete with the big boys for sure. A-

The label sez that this beer “May contain trace amounts of awesome..” which is simply untrue. It’s all awesome! Or maybe I’m just excited by the prospect of another local brewery that has the ambition to do some crazy barrel aged stuff like this. Also, free beer always tastes better. Still, I think this one is a true winner and could really put this brewery on the map when the finally get off the ground.