Even amongst pumpkin beer haters, there’s a tacit acknowledgement that yes, The Bruery’s Autumn Maple is awesome even though it kinda, sorta fits the category, despite using yams instead of pumpkins. Aside from the yams, it differs in a few other key ways. First you’ve got molasses and maple syrup, which, you know, sploosh. But the yeast is what ties it all together. The Bruery’s house strain of Belgian yeast is fantastic and pairs well with the traditional pumpkin pie spices, not to mention all that other junk.

So those punkels up at Neshaminy Creek, not wanting to do the same old thing in the oversaturated pumpkin beer market (i.e. bland amber base, pumpkin, and shit tons of spices), went all German on our asses. They amped up their recipe for Dunks Ferry Dunkelweizen, added the requisite pumpkin, cinnamon, allspice, and nutmeg, and fermented using traditional Bavarian weizen yeast. The result is something Autumn Maple-like, which is high praise. Definitely worth checking out, even for the pumpkin haterz.

Plus, check out that label, it’s awesome. And for those of you disgusted by pumpkin beers showing up in July, those fine Neshaminy Creek folks made sure to release this after the “unofficial” end of summer, Labor Day Weekend. Not that any of that really matters, but still. Oh yeah, beer: 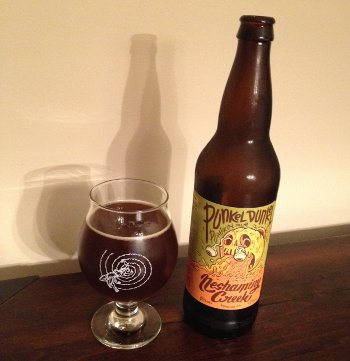 Neshaminy Creek Punkel Dunkel Pumpkin Wheat Ale – Pours a very murky, cloudy brown color with a cap of light tan head. Smells beautiful, huge spicy character, and while some of that is typical pumpkin pie spice(cinnamon, ginger, clove, brown sugar, etc…), it matches really well with the weizen yeast character (bananas and even more clove). Taste is similar, lots of Weizenbock spice and wheat, brown sugar, with the pumpkin pie notes (cinnamon and the like) hitting in the middle and lasting through the finish. Mouth feel is medium bodied, very well carbonated, spicy, and yet somehow almost creamy. Hint of sticky booze, but that works well here. Overall, a very good, uncommon take on the pumpkin genre, well worth trying even for folks who don’t normally go for pumpkin beer. It actually reminds me more of The Bruery’s Autumn Maple than anything else… B+

Rich suggests they make a Doppelbock pumpkin beer next year, which, yeah, sounds awesome. Of course, due to the lagering period, they’d either have to make it without fresh pumpkin (though it’s not like most pumpkin beers actually do that these days) or release it much later than normal, but I’d totally be down with applying pumpkin to other beer styles (pumpkin stouts are actually pretty great). Anywho, Neshaminy Creek continues to make some interesting stuff, so you’ll probably hear more about them in the future…