Two new Weyerbacher beers have been making the rounds of late, and as a local brewery of import, I am, of course, on top of that. Because I’m awesome, that’s why. Also, it’s a good way to start my vacation.

First up is Viridis Lupulus, a new seasonal release meant to highlight various hop combinations. This year, we’ve got Apollo, Calypso, Centennial, and Galaxy hops, bottle conditioned in a 750 ml bottle with actual good artwork. I think this is worth noting. A couple years ago, Weyerbacher’s logo utilized Comic Sans and their labels were hit or miss to say the least. Comic Sans! Now I’m not saying this thing should win awards or anything, but it’s quite nice, and a big improvement over Weyerbacher’s former designs. 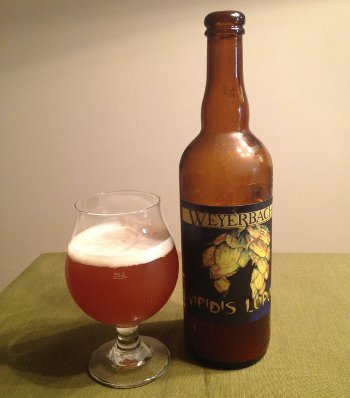 Viridis Lupulus – Pours a murky orange brown color with a finger of off-white head and great retention/lacing as I drink. Smells of dank, resinous hops with a nice citrus component that levels things out a bit. Taste follows the nose, lots of dank hop character, pine and resin, some citrus too, finishing quite bitter (in a good way!) Some malt presence as well, but the real star here is those dank hops. Mouthfeel is highly carbonated (but appropriate), medium bodied, with a dry, bitter finish. Overall, this is damn good stuff, I think I like it better than Double Simcoe. A-

Next, we have Weyerbacher’s 18th anniversary beer. Usually a small batch of an unusual style, like last year’s “style-obliterating 10.5% abv” saison, or the previous year’s Dark Braggot. This year we have an 11.1% ABV Weizenbock (or “Weizendoppelbock”). Last year, I found that the traditional “Weyerbacher anniversary requirement” of a strength around 10% ABV or higher to be something of a detriment, making for quite a “hot” beer. Will this year be any different? 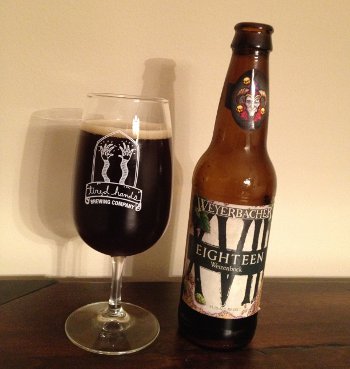 Eighteen – Another murky pour here, dark brown with a finger of quickly fading off-white head. Smells of typical weizen yeast, banana and clove coming through loud and clear, with some toasted notes and maybe even some nuttiness. Taste is very sweet and rich, with spice hitting strong, followed by some nutty toast and finishing with a wallop of fruity booze. Mouthfeel is rich and chewy, full bodied, lots of boozy heat in the mouth and that alcohol warming in your belly too. Overall, it’s a solid, interesting beer. B+

So an improvement over last year’s anniversary saison, and something could see aging rather well, but still a bit too boozy for now. Still, these two made for a good night, despite being very different styles. Indeed, that matched up well with my filmic double feature of Spring Breakers and Dial M for Murder, two very different (but both worthwhile) movies. Though I think I watched/drank in the wrong order (the brazenness of Spring Breakers matches better with Eighteen, I think, while Dial M would go better with the bitter IPA that’s plotting your death in exhaustive detail). Oh well. Such is life.

In other Weyerbacher news, I also recently took down some Weyerbacher Aquila, their latest Brewer’s Select beer. Basically a hoppy saison, I really enjoyed this one, even if I didn’t take notes (What? I was with someone. I’m not a total social pariah, only a partial one.)