So what I want to know is: who is Jack and why doesn’t he know how to spell “Abbey”? Dear reader, I’m so sorry I haven’t tackled this conundrum yet. It turns out that Jack is one of the three brothers who founded the brewery. He must be the oldest one, since he clearly got to name the brewery. So far, so normal, but then why the blatant disregard for spelling? Is Abby some sort of Ye Olde European spelling? Nope! Abby is actually Jack’s wife, and he named the brewery in honor of her, presumably scoring major brownie points. Well played, Jack.

This particular offering is another smoked beer, but like yesterday’s beer, I’m not getting much of that fabled meatiness out of the smoke, just plain campfire… which has its charms anyway, but still. I like bacon, is what I’m trying to say, and if there was a non-disgusting way to impart such flavors in beer, that would be nice. But I digress, let’s brandish our cloak and dagger and fight dishonorably, like a spy: 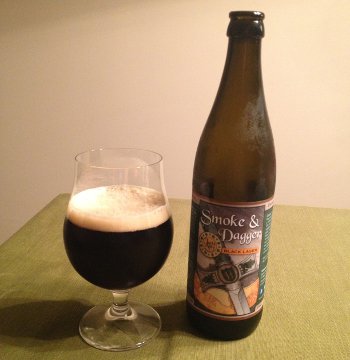 Jack’s Abby Smoke & Dagger – Pours a dark brown color with a finger of bubbly tan head. Smells lightly of toast and maybe a bit of smoke. Taste is surprisingly tame, with some roast and that smoke playing around the edges. It’s not a powerful smoke character, it’s actually integrated rather well with the rest of the beer. Mouthfeel is medium bodied and well carbonated. Overall, it’s a solid beer. B+

This exhausts my current supply of Jack’s Abby. While none really made me fall down and see God, they were all pretty respectable in their own right, and represent a nice change of pace from the onslaught of saisons, stouts, and IPAs I seem to always fall back on. I’ll certainly be keeping my eyes open for more of their stuff in my travels.