Eric at Focus on Beer recently posted an excellent rambling exploration of the utility and prevalence of beer reviews in blogs and whatnot. It seems to have inspired a lot of responses, so I figured that I’d throw my had in the ring… but then I read Ed’s reasoning, which absolutely nails it:

…a lot of that focus is turned to you as a reader and why in general, beer reviews probably aren’t truly useful to you. But I’d like to take a moment and focus on someone that I think beer reviews are greatly useful to, and that’s us bloggers ourselves.

I’ve been blogging since the turn of the century (though this beer blog is only a few years old at this point), and my number one reason for blogging has always been selfish. I want to learn about something, so I write about it. I like learning about stuff and of course I want to share it with everyone, and I would’t maintain public blogs if I didn’t hope for some sort of audience, but that’s all secondary. In the case of this blog, I was in the midst of exploring the vast world of beer and getting a little lost in the process. So I started blogging about every beer I drank. Learning has always been the goal, and if you don’t believe me, go and read my first post.

Of course, I didn’t want this blog to be purely reviews, but it sorta evolved into that. I try to spice things up with notes about the brewery, pedantic style debates, historical digressions, and even more off the wall stuff like Screenplays or Choose Your Own Adventure Beer Reviews. I’ll be the first to admit that my tasting notes are a little on the dry side, but it’s the stuff surrounding them that’s most important. I’d hope that I’m somewhat successful on that score, though I have noticed recently that it’s getting a little harder. I’ve already written about a lot of interesting breweries and styles, and I don’t want to keep repeating myself, so I have to come up with something else.

As for whether or not reviews can be useful, I think they can, but it still requires you to have a fair amount of baseline knowledge. It’s funny, but I find reviews much more useful now than I did when I first started trolling BeerAdvocate and RateBeer. Part of that is that my BS meter has been calibrated to tune out blowhards who use absurd descriptors and whatnot, and part of it is that I’ve learned enough about my tastes to pick up on certain aspects of a beer that I know will turn me on/off (whether it’s a highly rated review or not).

Ultimately, it’s all a bit of a wank. Everyone is different, and while my approach is to compulsively write about what I’m drinking, it’s not like you have to do anything special to enjoy beer. You don’t need any specialized knowledge, you just need to drink it, which is good enough for me.

Anywho, here’s a beer from a brewery I really like that I found a bit disappointing. I actually think these tasting notes might even be useful if this is a beer you’re thinking of purchasing, because it’s a really weird beer. Not Calagione-level weird, but still. Might be worth knowing what you’re in for with this one… 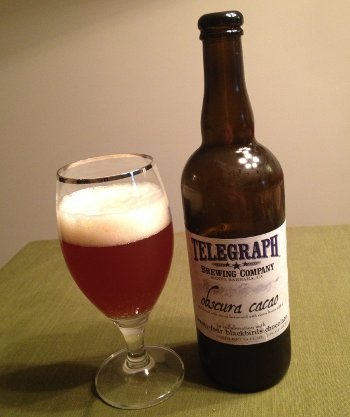 Telegraph Obscura Cacao – Pours a pale golden brown color, not what you’d expect from something brewed with chocolate, with a finger of bubbly off white head. Smells of spicy, musty Belgian yeast. As it warms, that cacao comes through loud and clear. Taste also features that spicy Belgian yeast character, with chocolate flavors coming through strong late in the taste and lingering into the finish. As it warms, the cacao becomes even more pronounced. There’s a dry bitterness in the finish as well. Unfortunately, these flavor elements don’t really come together in a completely harmonious way. It’s like the cacao is fighting the Belgian yeast instead of meshing. It’s not horrible, but it was a little disappointing. Mouthfeel is highly carbonated and spicy, medium bodied, but easy enough to drink. Overall, this isn’t a spectacular beer, a little muddled and unfocused, but it’s not the abomination that the ratings seem to indicate either. Spicy Belgian style with some chocolate notes that aren’t particularly well matched. Not bad, but again, it’s not a harmonious combo. B-

I still want to explore more of Telegraph’s offerings, particularly Gypsy ale, and I’m sure you’ll be seeing more of them on the blog at some point.