I’ve mentioned this beer a few times since I brewed it, but haven’t really done a proper recap. Oh sure, this bottle I’m reviewing was the last bottle in existence (supr .rar 24 bottle release guize), so it’s not like you’ll get to try it, but as per usual, I have some minor learnings. I think. I mean, I’m no master brewer, but then, that’s the point. In W3C markup validation parlance, I get 1 error, 1 warning on this batch. Fortunately, beer fails gracefully, and drinkers are like browsers in that they tend to be forgiving of minor faults. Ok, I’ll stop torturing this metaphor now.

First, the error, which was that I overcarbonated the beer. Normally, with a 5 gallon batch, you just pick up a 5 ounce packet of corn sugar and go to town, but I was making a small batch here, so I had to break out the measuring cups and figure out proportions. I clearly erred on the side of too much priming sugar here. Fortunately, all that means is a wicked big head that takes forever to go away. No gushers or anything that annoying, and if you pour carefully, it actually works well enough. Plus, this should be easy to correct in future batches.

Second, the warning, which is that I should probably be more careful about sourcing my hops. In particular, I’m going to be more wary of “loose” hops. This batch came out super piney and resinous, very dank stuff. Now, I enjoy that component of Simcoe and the like, but I also tend to associate that with hops that are less fresh. For my first batch of Simcoe IPA, I had the vacuum sealed HopUnion packets, and when I cracked open my first bottle of that stuff, it had this beautiful, massive grapefruit character. As time went on, that pine character emerged more and more, eventually fading back into the malts the way unfresh IPAs do.

I don’t mean to say that the hop character was poor or that this beer was an immediate malt bomb (the way unfresh hoppy beers are), but I never got that big juicy citrus component that I was shooting for. Now, I did switch up the hop schedule, adding some Falconer’s Flight and Citra into the mix (with Simcoe remaining on bittering and dry hopping duty), but FF and Citra are also known for their citrus components, so I was still hoping for more there. All my hops for this batch were just in loose baggies, not vacuum sealed or anything (like you’d get from Northern Brewer or HopUnion). Also, I was definitely buying the last of the FF, and there was only a little Simcoe left (in other words, those hops had probably been in the hop fridge for a while). Again, this wasn’t a disaster or anything, but it’s something I’m going to keep an eye out for in the future.

In general, though, the beer seemed to go over well. It was brewed for a specific event (the eponymous Fat Weekend), and we got through the full half case (which is all I brought) pretty quickly (and I only had one). But enough rambling, let’s take a closer look: 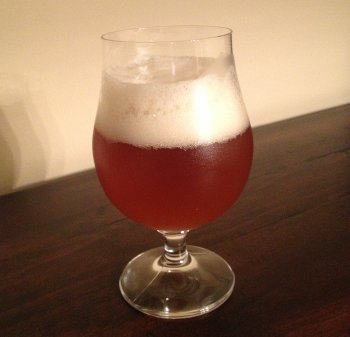 Kaedrin Fat Weekend IPA – Pours a dark orange color with a big three finger fluffy, bubbly head. Smells super dank, resinous, piney, a little citrus too. Taste follows the nose, crystal malt with lots of dank, resinous, piney hop flavor, some citrus peaking out too. Mouthfeel is medium bodied, super carbonated, perhaps over-carbonated, but still very crisp and refreshing. Overall, it’s a solid IPA, a little overcarbonated, and I’m getting the impression that the hops I used were not quite as fresh as I’d like, but it’s still quite solid. Not quite as good as my first batch of IPA, but still a nice B level beer (borderline B+, and could have easily gone that way if I did the carbonation right)

This, of course, reminds me that I should probably get off my arse and fire up my next batch. Planning on a saison at this point – a little scared to introduce Brett into my homebrew setup, but then Beerbecue suggested I name it Kaedrôme Saison and how can I really resist that? Can I do that without wild yeast? Maybe I can just find some strange farmhouse yeast instead of the typical 3711 or 3724 stuff…