The name “Nielsbohrium” was suggested not once, but twice for newly discovered elements. Both times: rejected! The name comes from theoretical physicist Niels Bohr, and one of the rejected elements did end up being named after him (just Bohrium, sans the Niels). Well, 14 years later, the name Nielsbohrium finally found a home in, quite frankly, a much awesomer substance.

This beer is the third collaboration between Mikkeller and Cigar City, though technically it’s a blend of their two previous creations: Dirac and Bohr, both imperial sweet stouts brewed with raisins and spices (apparently cinnamon). The blend was then aged in rum barrels and dubbed Nielsbohrium. I can’t help but think that Paul Dirac (a theoretical physicist who actually collaborated with Bohr) is getting the short end of the stick in the naming department, but then the beer is awesome and I’m betting that Dirac and Bohr high-fived each other up in heaven when this beer was released in 2011. Huge thanks go to Dave for slinging this bottle my way, as it’s a spectacular beer, even after 2 years: 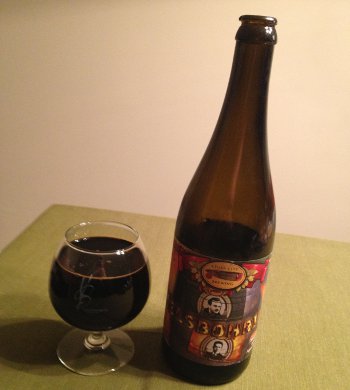 Cigar City and Mikkeller Nielsbohrium – Pours a deep, dark, pitch black color with the faintest cap of brown head that quickly resolves into just a ring at the edge of the glass. Smells utterly fantastic, lots of oak and vanilla, some caramel, and a little of that boozy rum. Taste starts with rich caramel, very sweet, but then you get a hint of bitter roast, some spiciness, oak and vanilla, maybe some port-like notes (or dark fruit, presumably from the raisins), and that boozy rum hitting towards the finish. That rum barrel character is distinct, but still very close to a good bourbon barrel treatment, making for an interesting experience. Extremely complex, evolves well as it warms. Mouthfeel is very thick and heavy, viscous, full bodied, and chewy, with that richness that comes with proper barrel aging. An intense beer, I took my time with this one, and loved every second of it. Overall, this is a superb barrel aged beer. A

Well, that certainly went a lot better than my last Rum Barrel Aged beer! Cigar City continues to impress. I was a little worried about how old this one was, but I suspect it has held up remarkably well (I never had it fresh, but in my experience, sweet stouts age well).