After sampling this tiny Scandanavian brewery’s wares a few months ago, I immediately made plans to get my haands on some more of their stuff. Norwegian Wood was possibly the best straight-up smoked beer I’ve ever had, and this one, well this one is unique. They call this thing a “Double Extreme Imperial Wheat Stout”, a style I can’t imagine is very common. I’m sure some cuckoo-nutso homebrewer is out there right now doing the same thing, but then again, these HaandBryggeriet guys are basically homebrewers. They brew in their spare time on “an absurdly small scale”, which allows them to embrace whatever quirky ideas they may have. In this case, the wheat malt and yeast mixes surprisingly well with the more traditional roasted malt character, and I got some really well balanced smoke out of it too. Truly, the force is with this one (even if it is the dark side): 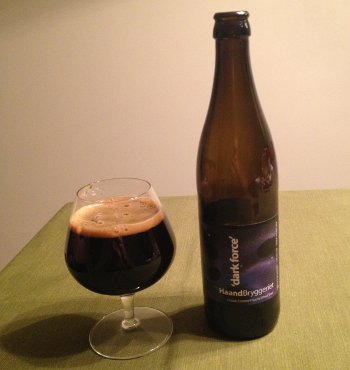 HaandBryggeriet Dark Force – Pours a very dark brown, almost black color with half a finger of light brown head. Smells very sweet, caramel, toffee, some wheat, some roast, and maybe even some smoke. Actually, as it warms, that smoked character develops even more, giving off a sorta meaty character. This isn’t one of those overpoweringly smoked beers, it’s subtle, but distinct, and while I usually don’t get meaty character out of smoked beers, I’m getting it here. Taste has some light, rich caramel tones, that touch of smoke is more prominent here too, and some wheat and roasted malt too. Again, smoked bacon character is emerging as it warms, and it’s actually really well matched with the rest of the beer. This is not one of those unbalanced “who put their cigar out in my beer” affairs, it actually fits with the rest of the beer. Subtle and complex flavors. Mouthfeel has plenty of carbonation, a welcome depth and richness. It’s not dry, but for such a big beer, it’s not very sticky icky either. Overall, this is an excellent and well crafted stout. Delicious and complex, well worth seeking out. A-

This pretty much exhausts my current supply of HaandBryggeriet treats, but I’m sure I’ll revisit them soon enough. They’re clearly in the upper tier of my Euro-brewer experience.