Smoked beer week continues with Clown Shoes’ second anniversary ale, a Smoked Imperial Stout called Vampire Slayer. I have to admit, Clown Shoes doesn’t feel like my kinda brand. They seem to rely on marketing gimmickry and controversy moreso than quality, but then, I really haven’t had many of their beers either. In particular, they appear to have some well respected imperial stouts, so I picked up a couple to give them a shot.

Perhaps I should have read this label a little more closely though, as I didn’t immediately realize it was a smoked beer (I should note that it was readily labeled as such, I just wasn’t being very observant), nor did I see that it was one of those beers made with gimmicky ingredients like “Holy Water” and smoked with “hickory, ash, and vampire killing stakes”. I mean, it’s no Dogfish Head, but Holy Water? Really? On the other hand, this thing is sporting a respectable 4.15/92 rating on BeerAdvocate, and we all know how much the opinion of a bunch of strangers on the internet means. So let’s put on some clown shoes, sharpen our stakes, and see if Van Helsing would approve of this beer: 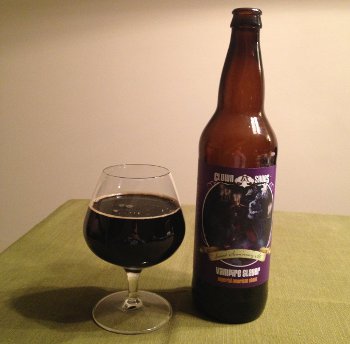 Clown Shoes Vampire Slayer – Pours a very dark brown color, almost black, with minimal head. Smells of roasted malt with a little coffee character thrown in for good measure. The taste features a bit more in the way of crystal malt character, but the roast is certainly still hanging around as well… and it’s brought a friend in the form of a smokey flavor that is actually very subtle. There’s also a very well matched bitterness keeping all those malts in check, if not going all Black IPA on their asses. Mouthfeel is full bodied, on the thicker and chewier side, though not quite a monstrous beer. Well carbonated, but smooth, not dry, but no really stickiness to speak of either. Overall, what we have here is a very well balanced imperial stout that won’t quite melt your face, but will perhaps make you grin in appreciation. B+

So it’s not quite a revelation, but perhaps Clown Shoes have earned another chance, as I picked up another of their Imperial Stouts, Blaecorn Unidragon, a decidedly more traditional take on the style. Not sure when I’ll get to it, but stay tuned anyway. Up next in smoked beer week, we strap on some proton packs and go Ghost Hunting, only to find ourselves with spectral… Dalmations? Find out what the heck I’m talking about tomorrow!