Port Brewing’s Santa’s Little Helper is a solid, if unremarkable, imperial stout. I’ve had it a couple times, and it’s fine, but I always feel like I’m missing something. Perhaps what I was missing… was bourbon! 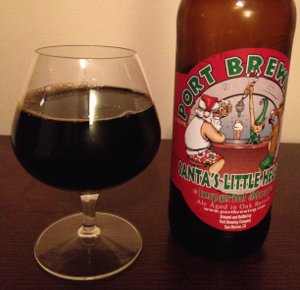 Port Brewing Barrel Aged Santa’s Little Helper – Pours an oily black color with very little carbonation, just a tiny ring of brown head forms at the edge of the glass. Smells strongly of bourbon, maybe a hint of the underlying roasted malts, but the bourbon (and too a lesser extent the corresponding oak and vanilla character) is clearly the focal point here. Taste is again dominated by bourbon, though there’s also a pronounced malt sweetness that comes through, and some roast too. The beer opens up as it warms, with oak and vanilla asserting themselves and more of that caramel and roast malt character coming out to play too. Definitely more complex as it warms. Mouthfeel is almost completely flat, very little carbonation, sticky, some alcohol heat. Overall, it seems like the base beer didn’t really stand up to the bourbon barrel treatment so well (perhaps the fact that I’m not a huge fan of the base beer also has something to do with it). It’s better than some, and I’m enjoying it, but there are many better BBA beers. B

Port/Lost Abbey continue to put out interesting stuff, even if I’m not totally in love with all of it. But when they’re on, they’re really on, so I’ll no doubt be trying more of their beer soon enough…