Every year, I buy a six pack of Anchor Christmas. And every year, I remember why I don’t normally buy six packs. On the other hand, this yearly tradition, when combined with my packrat tendencies, yields the possibility of a vertical. Yeah, yeah, Anchor Christmas has a different recipe every year so it’s not technically a “vertical”, but it’s close enough for me. Just to underline the inappropriateness of this non-vertical vertical practice, I sandwiched them around a filmic double feature of Lincoln and Abraham Lincoln: Vampire Hunter. So there. 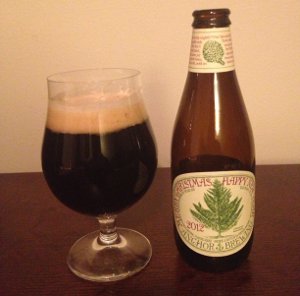 Anchor Our Special Ale 2012 (Anchor Christmas) – Pours a dark brown color with a couple fingers of fluffy khaki head and plenty of lacing as I drink. Smells of mulling spices, cinnamon, nutmeg, and the like, maybe even anise, but the malt and hops seem to peek out a bit, even if they’re overshadowed by spice. The taste is also pretty well defined by all those spices, but the malt backbone also asserts itself, some caramel and toast going on (maybe even a hint of coffee? As it warms I seem to be picking this up more…), and I’m getting some bitterness in the finish too. It’s no pale ale or anything, but well matched with the spice. There might be a faint amount of pine or spruce or something going on here, though I’m not sure if my mind is just playing tricks with me or what. Mouthfeel is a little on the thin side, though there’s enough substance there to make this feel right for the style, an Overall, I like this, it’s a solid entry in the winter warmer style, if not quite a transcendent experience. B+ 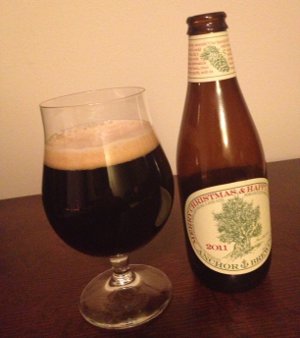 Anchor Our Special Ale 2011 (Anchor Christmas) – Pours a dark brown color with a very slight amber tint to it and a finger or two of tightly bubbled, tan head that leaves just a bit of lacing as I drink. The smell is actually quite similar to this year’s entry, lots of mulling spices, some malt character. The taste is again quite similar, though that coffee flavor I was picking up in this year’s edition is not here. Still, lots of bright, clear spice, maybe more than this year’s… Nice range of malt flavors coming through here too. Mouthfeel is a little more robust than this year’s, but comparable, relatively light. Overall, both these beers are pretty much on par with each other. I think I might like this one slightly more, but only by a sliver. B+

Anchor is apparently considering a bigger change for next year’s batch: The 2013 Our Special Ale might no longer be a spiced beer. “I think we’ve taken this about as far as it can go. I’m leaning toward making a big change for next year.” Color me curious. Early editions of the Christmas beer were pale ales, which isn’t really very wintery, but why not? Or maybe they’ll go more stoutlike. Perhaps even increase (or, heck, reduce) that ABV… Whatever the case, it seems that next year’s vertical may display some more dramatic differences than this year’s edition. Sounds exciting.