This marks the second beer I’ve had from Great Lakes that’s named after a nautical disaster. The other, Burning River, was named after the tendency of the Cuyahoga River to catch fire. This one is named after a doomed freighter, the SS Edmund Fitzgerald, that sank rather suddenly and unexpectedly. Oh sure, there was apparently a pretty bad storm, but no distress calls were sent, experts are baffled as to what caused the sinking, and none of the crewmen’s bodies were found. Plus, the so-called “Mighty Fitz” apparently suffered a number of mishaps during its maiden voyage, including a collision with a pier and the fact that the champagne bottle used to christen her refused to break the first couple times they tried. Somewhere in Ohio, a failed screenwriter clings to a tragically unused X-Files spec script attributing the sinking to aliens or perhaps an outbreak of giant fish-people.

Oh yeah, the beer. This is apparently one of the country’s best regarded porters. Not a style I’m particularly fond of; quite frankly, I find them to be a little bit samey (with the one exception being Everett, a beer I should have rated higher as it looms much better in my head these days than it did in comparison to other mind-blowing HF beers that day). I should probably rev up a double feature or two at some point to cut to the heart of the matter, but for now, I’ll just continue to be a little baffled at just how beers like this get rated so highly by the Beer Advocate set. Maybe I just don’t get porters. 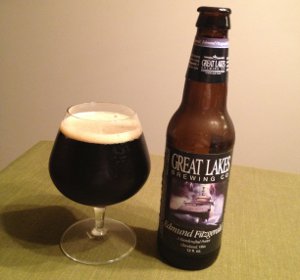 Great Lakes Edmund Fitzgerald Porter – Pours a dark brown color with a finger of tight-bubbled tan head. Smells like a typical porter, lots of roast and toast, maybe some coffee and bitter dark chocolate too. Taste goes in a similar direction, lots of toasty, roasty, burnt flavors, a little light on the bitter dark chocolate, maybe some coffee. Mouthfeel is well carbonated, medium bodied but not at all heavy. It’s actually got a really nice feel. Overall, this is a well constructed take on a typical style. Porters aren’t really my thing, so I don’t quite have that enthusiasm for this that the rest of the beer dorks do, but it’s definitely one of the better porters I’ve had. Could easily become my cigar smoking accompaniment (a position generally held by Founders Porter these days). B+

Great Lakes continues to be a sorta ho-hum brewery for me. I quite enjoy many of their brews, but I’ve never really had something that really lifted my kilt, if you know what I mean. Still curious to try some of their bigger, seasonal/special release beers though.