Fall is home to some of the beer nerd’s most distinctive seasonal styles. The most popular are, of course, pumpkin beers and Oktoberfest beers. Very different styles, but both represent the season well. In recent years, a third seasonal brew has been charging ahead as well, albeit a somewhat less defined one: the harvest beer. Usually, this involves freshly harvested hops, used within a couple days of being picked off the vine, but there’s also the occasional barley harvest beer too. Still, the hoppy harvest seems to be the thing that inflames beer geeks’ passions. Using fresh hops gives a slightly different flavor profile to a beer than you would get from dried or pelletized hops, and this is basically the only time of the year to get such beers.

I imagine that west-coasters get the better end of the deal here, as the majority of hops are grown in the Pacific Northwest, so they’ll probably have the easiest access to fresh hops… whereas us east-coasters have to make due with tiny local hop farms. I had a few Harvest Ales last year, but for whatever reason, none really blew me away, including Victory’s offering. Fortunately, this year has gone much better: 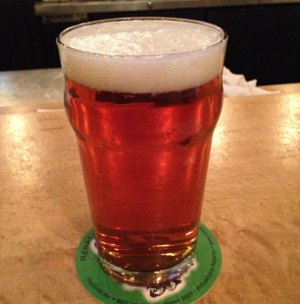 Victory Harvest Ale – Brewed with fresh Cascade hops harvested just hours earlier from the Catskills in New York state, near as I can tell, this is the same recipe they made last year, but I’ll be darned if I didn’t fall in love with it this year. Pours a clear, bright orange color with a couple fingers of frothy white head and tons of lacing (this seems to be typical when drinking beers at Victory’s brewpub). Smells of bright citrus and big pine aromas, really nice. Taste is also underpinned by that citrus and pine hop character, but some earthy and maybe even spicy notes too, and a well matched malt backbone keeps it balanced. Mouthfeel is excellent, well carbonated but smooth, light to medium bodied, quaffable. Overall, this is an excellent beer. Victory calls it “highly aromatic and sensual”… sensual? Ok, sure. I call it delicious, complex, balanced, and quaffable. A- 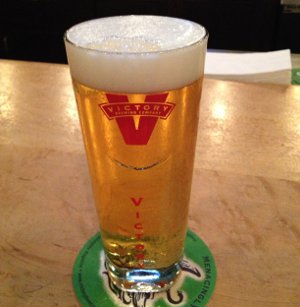 Victory Braumeister Harvest Pils – Braumeister Pils is Victory’s draft-only pilsener that they seem to use as a playground for playing with various hop varietals (for instance, earlier this year they played with a bunch of experimental and new German hops, even going so far as to do a series of batches, each using the same hop varietal, but from different hop fields, which apparently yielded subtle differences between the batches). So it makes sense for them to make a harvest version using freshly picked Mt. Hood hops, again picked straight from New York. Pours a clear yellowish gold color, with a finger of fluffy white head (and again, tons of lacing). Smell has a surprisingly bright citrus character, along with some of those more common, Pilsnery spicy/earthy notes. Taste emphasizes the typical earthy and spicy Pilsner profile, but that bright citrus lightens things up a bit. Mouthfeel is light and smooth, a little lighter on carbonation than the regular harvest, but still appropriate. Overall, this is a good pilsner, and I appreciate the fresh, bright character… but Pils just isn’t my style. I’m sure Pilsner fanatics would love this take on the style, but I’ll give it a solid B

There you have it. Lots of exciting Victory stuff coming up, so stay tuned for that. And check back in tomorrow for a look at Tröegs’ Fresh Hop Ale (and something else called Special HOPS Ale).