Made with real, 100% Heirloom Organic Martians from a small artisanal farm in Cydonia. Some people frown on using sentient beings as an ingredient in beer and those wacky brewers at Almanac may be starting a war of the worlds, but damn, this stuff tastes good!

In all seriousness, Bière De Mars is brewed in March, which is actually what “Mars” translates to. It’s a variation on the Bière de Garde style, which means “beer worth keeping” (or guarding, heh) and were historically brewed in Winter or Spring for consumption in Late Summer or Fall (due to the fact that brewing was difficult during the hot months of summer). In that sense, I feel like Bière De Mars shares a certain kinship with the German Märzen (aka Oktoberfest), and it feels like they both have a similar character of slightly toasted malts and noble hops, though Bière De Mars also uses a Belgian ale yeast strain which is what really distinguishes this from Märzens.

This particular beer is made by those tiny artisanal brewers at Almanac, and like most of their beers, it was a one-off batch that was brewed in collaboration with local farms, this time using Santa Clara Valley Fennel. This marks the last beer in my first beer trade, so extra special thanks to Jay of the most excellent Beer Samizdat blog for digging up such gems (seriously, all of the stuff he sent me was in the great to sublime range of quality)… 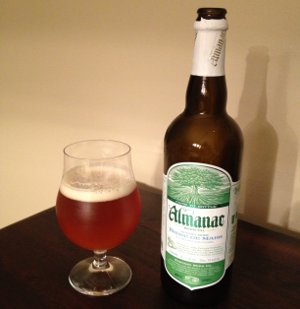 Almanac Spring 2012 Bière De Mars – Pours a slightly hazy golden orange color with a finger of fluffy white head that shows pretty good retention and lacing. Smells of bready Belgian (apparently French) yeast along with sorta herbal spices (apparently fennel!) and even some of that caramelized malt. Tastes sweet, with assertive spicing and a sorta nutty, caramelly character in the start, maybe a hint of toasted malt flavor too. It’s reminiscent of an Oktoberfest beer, but with more spicy Belgian character. Mouthfeel is medium bodied, medium carbonation, easily drinkable, with a drier finish than I’d expect. Overall, this is excellent, well balanced, flavorful stuff. So glad I got to try some! A-

So Almanac has definitely established a foothold in Kaedrin mindshare, which is a bit of a problem since they don’t really distribute here, but I’m hoping I can beg, borrow, or steal some more at some point. Wish me luck.