Beer dorks get all excited when Massachusetts-based Pretty Things release a new beer, but on the other hand, this is a curious offering. So curious that Pretty Things did a sorta soft launch last year to see if anyone would notice. Why the hesitance? Well, beer dorks usually don’t get all that excited for beers with only 3.4% ABV… but apparently the soft launch went swimmingly, and now Pretty Things is bottling the stuff and distributing it.

I kinda love the title of the beer, though it does represent something of a confusing heritage. Magnifico is Italian for “Magnificent” and is usually used to indicate a person of distinguished rank or importance. I love it when a beer name has punctuation, but the leading inverted exclamation is a Spanish convention, right? And the beer itself is a Belgian style (at least, that’s what it’s labeled as on Beer Advocate, though Pretty Things leaves it a mystery on their site – hey, why don’t we call it a saison?) In any case, I was intrigued, so I picked up a bottle: 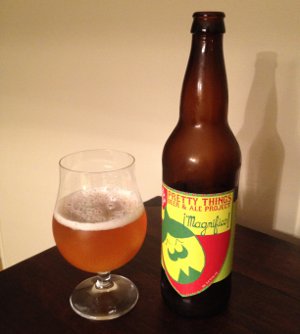 Pretty Things ¡Magnifico! – Pours a slightly hazy, light yellowish gold color with a finger of white, fluffy head. Smells of herbal, grassy hops along with a very light amount of Belgian yeast. The taste most prominently features those herbal, grassy hop flavors, not a lot of malt character (which is to be expected in something like this) and just a wee bit of spicy Belgian yeast flavors. Mouthfeel is highly carbonated and effervescent, but also extremely dry. There’s enough subtle complexity to elevate this above a lot of beers, but it’s not going to rock your world either. Then again, that’s probably not the point. It’s a welcome change of pace and I kinda wish there were more well-crafted low ABV options out there… They might not blow your mind, but they get the job done. B

Also appearing in stores recently, Pretty Things Meadowlark IPA, their first take on that most popular of styles (spoiler: it’s quite good!) Look for a review soon. And hey, look, I’m only a couple of weeks behind on reviews, so this might come sooner rather than later.