Every once in a while I think to myself: Self, you should try more German beer. They’ve got a long, illustrious brewing tradition and you’ve only tried but a few beers made there. I then drink one, such as Ayinger’s well-respected hefeweizen, and promptly forget to buy/drink any others. While usually well-crafted and tasty, I’m rarely all that intrigued with German beers. But who am I kidding, I probably just saw some fancily packaged, limited batch, barrel-aged behemoth and my carefully curated Pavlovian response kicks in, making me blind to the likes of German beer. But I digress. The point here is actually that I don’t always drink massive face-melting American beer, and I must admit that this one really hit the spot after Philly Beer Week (where I probably overdid it with the drinkin). 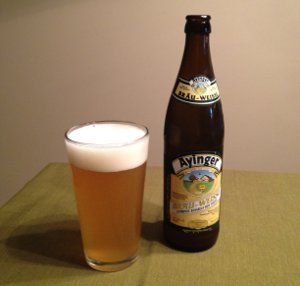 Ayinger Bräu Weisse – Pours a cloudy golden yellow color with two fingers of white, fluffy head. Smells strongly of traditional banana and clove weizen yeast. Taste has that same fruity, spicy character to it, with that wheat flavor kicking in around the middle and a really nice additional fruity note hitting towards the finish and lasting through the aftertaste. Mouthfeel is beautiful, crisp, refreshing, light, but well carbonated and substantial. Overall, one of the better Hefeweizens I’ve ever had. A fantastic summer beer too. B+

Well, I don’t have any other German beers in the pipeline, but I’m sure I’ll have another hefe or two this summer, as they really do hit the spot on a hot day. In the meantime, I’ll have to make do with all these face melters I bought recently. It’s a hard life.