This beer is named after Danny Glover. No, not the actor we know and love (he’s too old for this shit), just an unfortunate soul who worked at Tröegs for a short time. Not to be a downer, but he died in a car crash at the age of 24. Tröegs decided to brew a beer in honor of Danny, who seemed like an all-around great guy:

Even if Danny’s arrival time for work was less than predictable and his uncanny ability to forget everything about his job overnight drove us nuts, he was a hard worker who would do any job with enthusiasm. But more importantly Danny had an infectious smile, a heart of gold and the absolute ability to spread joy through a room – it was hard not to love the guy.

A portion of the proceeds from this beer are being donated to the Gift of Life Organ Donation program, so good on Tröegs.

The beer itself is apparently a variant of Nugget Nectar, taken in the direction of an American Black Ale (or Black IPA or whatever you call that stuff), and it makes a fitting tribute. 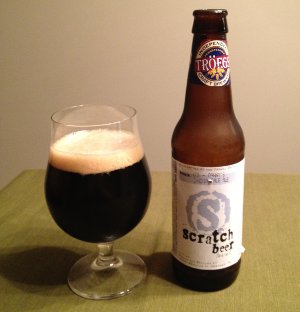 Tröegs Scratch Beer 63 (Danny’s IPA) – Pours a dark brown color with a finger or two of tan colored head and some lacing as I drink. Smells full of citrusy hops with a little pine thrown in for good measure. While I don’t get any roasty aromas, there is plenty in the taste. Taste starts with roasted malts, maybe even a bit of chocolate, before giving way a bit to the citrus and pine character of the hops. Not a ton of bitterness, but enough to balance all the flavors, and the roasted malts come out again in the finish as well. Mouthfeel is very much like an IPA. Well carbonated, but small bubbled and almost velvety. Overall, a very nice, well balanced version of the style. It’s a difficult line to walk, but Tröegs has managed to do so with this beer. B+

Back during Philly Beer Week, I chatted with a guy who lived near the new Tröegs brewery in Hershey and he mentioned that most of the best Scratch series beers aren’t bottled (and sell out quickly), but he agreed that this one was pretty good. Whatever the case, I’m always on the lookout for Tröegs Scratch beers…