One of the great things about Philly Beer Week is that you can sometimes get a taste of beers that aren’t really distributed around here. Hill Farmstead technically distributes to Philadelphia, but their production is so limited that this distribution is effectively limited to Philly Beer Week (with maybe one other event per year). And if Saturday was any indication, I’m guessing there isn’t any Hill Farmstead beer left in the area…

I wasn’t sure what to expect from the venue, but it was an absolute madhouse when I got there. I could barely walk in the place, but managed to get some beer (as per usual, beer nerds seem to be friendly folk, so it wasn’t difficult). After a couple hours, things thinned out considerably, allowing me to get a seat and even order some food. Because this was likely to be my only exposure to Hill Farmstead, I ended up drinking more than planned, but I was fortunately able to spread that out over a long period of time. But I was really happy to get my hands on some of this stuff, and I’m pleased to report that Hill Farmstead’s reputation is well deserved. 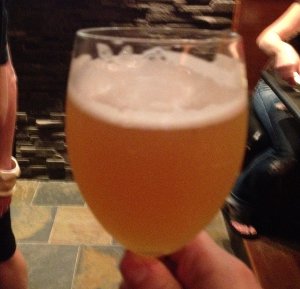 Hill Farmstead What is Enlightenment? – When I asked the bartender for this beer, he looked back at me with a quizzical look, as if I were hoping to ponder existential conundrums, but after repeating it a few times, I think he finally understood that I was asking for the beer, not transcendence. That’s what Hill Farmstead gets for brewing a series of beers inspired by philosophy. Anywho, this is their second anniversary beer, a “simple” pale ale… brewed with Simcoe and Amarillo hops (in other words, my favorite hops). It sounded like the perfect start to the day, and I think I was right.Pours a cloudy golden yellow with a finger of white head… Smells of huge pine aromas with some citrus notes. Taste is lightly sweet with huge pine flavor hitting in the middle, followed by a mild bitterness in the finish. Mouthfeel is light to medium bodied, with ample but tight carbonation. Quaffable, well balanced, outstanding beer. A-

Next up is Hill Farmstead’s most hyped and popular beer, the double IPA Abner: 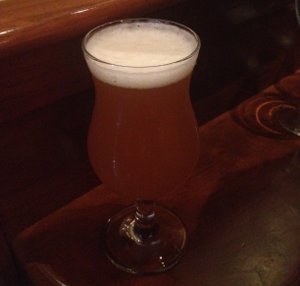 Hill Farmstead Abner – Part of the Ancestral Series, this beer was made in honor of the brewer’s grandfather, named Abner. Pours a darker golden orange color with a finger of white fluffy head and lacing abound. Smells of a more complex array of citrus aromas, with some pine. Taste is very sweet, but balanced out by those big, complex hop flavors of fruity citrus and pine, followed by a well matched dry bitterness in the finish. Really nice med to full body, plenty of tight carbonation… Not quite quaffable, but it goes down easy. Fantastic beer! A

At this point, I was really hoping to sample the Citra Single Hop Pale, but the keg kicked just as I got to the bar (I believe it was the first to go). I suspect that after the previous two hop bombs, this one may have suffered from an over-hopped palate on my part, so I wasn’t too upset, and drowned my sorrows in a glass of what turned out to be my favorite beer of the day: 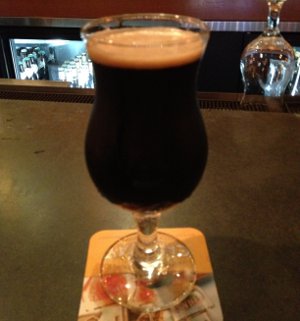 Hill Farmstead Society and Solitude #2 – Another from the Philosophical series, this is actually a sub-series exploring big, hoppy beers. They call this an Imperial Black IPA, and boy is it a doozy – certainly the best of the style I’ve ever had. Beers of this style usually make me crave a really good DIPA or Imperial Stout, rather than enjoy what’s in front of me… but not here. This is exceptional. Pours a black color with minimal head. Smells of bright, citrusy hops. Taste starts very sweet and rich, with a really nice, well matched roastiness in the middle, followed by a strong chocolate note and lots of citrusy and piney hops emerging quickly and lasting through a relatively dry finish. Mouthfeel is full bodied, thick, and almost chewy… but that relatively dry finish is what really sets this apart. No booziness at all, though it feels like a big beer. Utterly awesome, complex, well balanced, amazing beer! A

I figured I should continue with the series, and I drank this one slowly, whilst also taking in a meal. I was worried that my palate would be shot by this point, and I would certainly like to try this next one under better circumstances, but my feelings on this seemed to be in line with the beer dorks around me… Basically, I thought it was very good, but Abner was better: 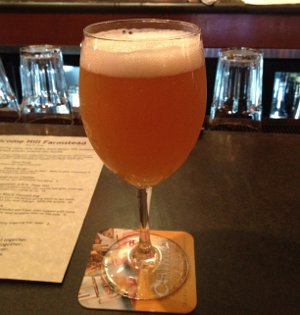 Hill Farmstead Society and Solitude #3 – Pours a cloudy golden orange color (lighter than Abner) with a finger of larger bubbled head and some lacing as I drink… Smells of sweet citrusy hops. Taste starts very sweet, with those bright citrusy hop flavors (little bit of pine) coming through strong… Mouthfeel is a little lighter than expected… Having this after the complex flavor bomb of #2 was probably a mistake, but even compared to Abner, I found this a bit lacking. Well, still a great beer, better than most DIPAs, but if given the choice between this and Abner, I’d go for Abner. B+

Beer Nerd Details: 8% ABV on tap. Drank out of a wine glass.

So I thought I was done at this point, and took a walk around the neighborhood to clear my head (another gorgeous day) and do some shopping, but I figured that these beers wouldn’t be around again for a year and I was feeling ok, so I plopped down for another one – the only beer I had that day that wasn’t assertively hopped: 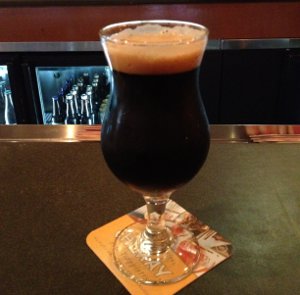 Hill Farmstead Everett Robust Porter – Another Ancestral Series beer (I think named after one of Abner’s brothers)… Pours a dark brown color with a lighting brown head. Huge roast in the nose. And the taste follows the nose – tons of roast from the get go. Very nice chocolate character opens up as it warms, even some caramel emerging as I drink more… Very well balanced flavors. Mouthfeel is deep and full, a slight richness, well carbonated but smooth. Exceptionally well crafted porter, a style I don’t normally go for… B+

Phew. It was a long day, but this was some of the best beer around and I had a pretty good time. Here’s to hoping Hill Farmstead starts increasing their production capacity and distributing their exceptional beers more… I have to admit, at this point, I’m a bit beered out. I may take the drinking a bit easy for the next couple weeks, but don’t worry, I’ve got quite the backlog of reviews built up…

2 thoughts on “Another Dispatch from Philly Beer Week”