So I’ve heard a lot about these Erie, PA brewers from the guys over at Aleheads, who did a great interview with the founder, Jason Lavery. As such, when I noticed a few bottles popping up here in Eastern PA, I jumped at the chance to try some of this stuff. Selection is still limited and I’m holding out hope for their summer seasonal, apparently a huge saison-style beer. In the meantime, I figured I’d check out this Imperial Red Ale.

This can be a bit of a strange style. A lot of times, it comes out like a reddish IPA or DIPA (think Gordon/G’Knight or Yule Smith Winter), but in this case, it was much more recognizable as a souped up Irish Red Ale. Knowing more about the brewery now, this is unsurprising, as these brewers are Irish, and you can see that influence all throughout their catalog.

Apparently the recipe for this has changed significantly. They originally used all Amarillo hops, one of the most popular and trendy varieties out there, but apparently small breweries can experience supply problems… From the Aleheads interview: “It’s a really sad story. The Imperial Red Ale was originally all Amarillo. From the hops in the kettle to the dry hops, but our hop contractor told us that since we’re so small, we won’t be getting any more Amarillo until 2013.” Well, crap. I love me some Amarillo hops. They’ve got this bright, juicy citrus flavor and aroma that’s just very difficult to replicate, hence Lavery’s woes. The beer I had was apparently a blend of Centennial, Cascade, and Nugget, but I’d love to get my hands on some of that Amarillo version someday (perhaps next year!), assuming the great hop contractor conspiracy deems it acceptable.

Anyway, I cracked this open to celebrate the return of Game of Thrones. It’s not a very… Irish… show or anything, but something about this beer seemed to fit with the atmosphere of that series quite well. Go figure. 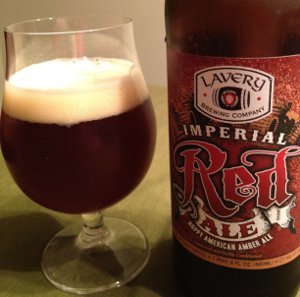 Lavery Imperial Red Ale – Pours a deep, dark red color with two fingers of small bubbled head. Smells are interesting… definitely some sugary sweetness and plenty of hop character, but when put together it’s hard to place. Is it… is it like a fruit rollup, but with earthy, piney hops instead of fruit? Geeze, I hate it when reviewers say stuff like that, but that’s what I’m getting out of this. The taste features a well balanced sweetness and bitterness, with neither overpowering the other – a relatively mild seeming beer. The malt backbone is similar to that of an Irish Red (amber and caramel malt, probably a hint of roasted malts for color), but unlike most in the style, strong hop flavors hit in the middle with a burst of citrus and pine (but not a lot of that resin character that I usually expect), leading in to a very dry finish. Mouthfeel is surprisingly light to medium bodied, and again, the finish is extremely dry. Overall, it’s more like a hopped up Irish Red Ale than anything else, but I like that concept and would gladly try this again. B

Well, there you have it. An interesting first taste, but I’m intrigued by a lot of Jason’s experimental talk in the Aleheads interview… though I have to wonder how much of that stuff will make it over to us Easter PA folk. As previously mentioned, I’m really hoping to get my hands on some of their Imperial French Ale, apparently a summer seasonal…