When do you drink an 18% ABV beer? Special occasions? Every other Flag Day? Leap Day? For breakfast? On the second Friday of March in the year of our Lord 2012? Ah, yes, that last one will do the trick, but it was a fortuitous turn of events that got me there, and I’m still at a loss as to when to open some of my other massive face-melters. It’s a delicious mystery wrapped in an alcohol soaked enigma, with a chaser of dehydration and hangover.

Fortunately, Dogfish Head packaged this one in a 12 ounce bottle, so it’s at least mildly approachable (I will leave the rant about big beers in big bottles for a later date). Apparently created on a whim at the Dogfish Head brewpub during the winter off-season months (which, I imagine, is how most Dogfish Head beers are created), this beer held the strongest beer in the world title for a short time. In this day and age where crazy Scottish brewers are making 55% ABV abominations and packaging it in taxidermied squirrels, it’s easy for beers like this to get lost in the shuffle, but credit where credit is due: Dogfish Head was making this beer in 1999, well before extreme beers were trendy or popular. And I do think this still stands up well today.

Anyways, events conspired to keep me sober for a while after work last Friday, which left me in need of a stiff drink (and just the right amount of time for a single serving). This would normally be a job for Scotch or Bourbon, but I thought this 18% ABV face-melter would do the job, and boy was I right: 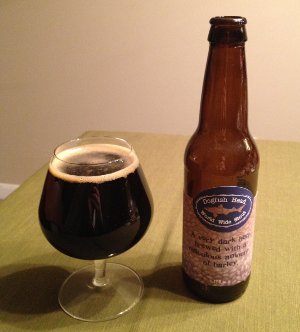 Dogfish Head World Wide Stout – Pours a deep, dark brown color with a syrupy appearance and about half a finger of tan head. Wonderful aroma filled with caramel and vanilla notes, maybe even some fruity character poking through along with a little booze. Smells more like a really big barleywine than a stout. Taste has lots of sweetness to it, that caramel malt being quite prominent, with some chocolate and maybe even some vanilla, but the big surprise is the sorta fruity booze that emerges in the middle and dominates the finish. Very little roastiness here, but tons of intricate flavors emerging as it warms up. Maybe just a touch of balancing bitterness in the sticky finish. Mouthfeel is full bodied, chewy, and hot. Carbonation isn’t high, but it’s not at a bad level either. The finish has just a little stickiness to it. Surprisingly well balanced and approachable for an 18% ABV monster. Tons of warming alcohol character going on in my belly after just a few small sips. This is certainly not a beer to drink quickly. Overall, I’m very impressed by this beer, a complex sipper, something that will probably age well, and quite interesting. Dogfish Head says it has a depth “in line with a fine port” which just makes me want to go to the liquor store and get me some of that stuff, as I’ve never had any before and I’d like to know if that’s an accurate description or just Sam making stuff up. For my purposes, this makes an excellent dessert beer. Not your typical stout, and definitely worth a try. A-

Man, this thing kicked my ass. As noted above, the bottle was apparently from 2010, which was something I bought inadvertently… but I’m glad I did so because I’ve heard the alcohol character overwhelms “younger” bottles. I’ve got another one of these in the cellar, which I can perhaps crack open the next time an 18% ABV opportunity comes along (and who knows when that will be). Incidentally, I also have some 120 minute IPA in the fridge (and in my cellar) that’s definitely still young, and I have no idea when I’ll get to that one… not to mention the bottles of Cuir and Coton I’ve been sitting on (those aren’t quite as strong, but they’re up there and they’re in 750 ml bottles too)…