Just what is a Melchior? Every time I see that name, I have to pronounce it like I assume Robert Loggia would. The Oak Melcheoooorrrrrrr!

As it turns out, Melchior is not a reference to a beloved character actor, but rather one of the Three Wise Men. Melchior, Caspar (aka Gaspar), and Balthazar were the three kings bearing gifts to the newly born Jesus. While not explicitly named by Mathew in his gospel, as near as I can tell, most of the details come from various Greek transcripts dating to the latter half of the first millennium. Basically, Biblical fan fiction.

Well, the relatively new brewers over at the Picobrouwerij Alvinne decided to make a series of beers celebrating our favorite Magi, then age them in a variety of barrels. This particular beer was brewed with mustard seeds and aged for 6 months in Calvados brandy barrels. Actually, the barrels apparently contained Cognac for 10 years and Calvados for 8 years. The label says that “We found these barrels at a local farmer in the French Contentin.” I get the impression that the Belgian brewers just got drunk, crossed the border and mounted an attack on France, who promptly surrendered, yielding old brandy barrels as spoils of war.

Beer Advocate lists this as a Belgian Strong Pale Ale, which makes sense, because my exhaustive research has revealed that Melchior was likely the king carrying Gold: 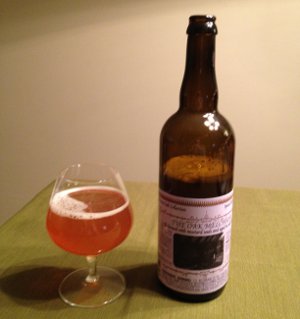 Picobrouwerij Alvinne The Oak Melchior – Pours a cloudy golden orange color with minimal head, actually quite a pretty looking beer. The smell has a twang to it that I associate with sour beers, and that seems to overwhelm any other aromas (upon further pours into the glass, I do get a sorta bready aroma too). I was naturally expecting the sourness to appear in the taste, but there’s not much there. Instead, I get typical rich oak flavors and maybe a bit of booze (presumably from the cognac and brandy) with a thick but smooth malt backbone. Maybe just a hint of a sour twang there, but you really have to look for it (and possibly imagine it). I’m not detecting the mustard seeds at all, but that’s as it should be. The flavors are complex enough that I’m sure the mustard played a role somewhere. The mouthfeel is chewy and heavy with just enough light carbonation to make the rich flavors palatable. The booze contributes a big warming feeling as well. An extremely unusual beer, but one I’m glad I got to try. If it weren’t for the disconnect with the aroma, this would be in the A range, but I’ll still give it a solid B+

Has anyone ever made myrrh beer? How about frankincense beer? I smell a homebrew batch coming on. Or something.

I’d be really curious to see how this Calvados barrel treatment would work on a darker beer style… and apparently Picobrouwerij Alvinne has done just that. For a “pico” brewery (i.e. a really small brewery), they sure do seem to put out a huge variety of beers, from typical Belgian styles to Imperial Stouts. Beer Advocate lists 54 different beers. And they’ve seemingly barrel aged all of their normal beers at some point. In several different types of barrels, no less. The Melchior itself has 5 different barrel-aged versions.

I bought this bottle on a whim because it sounded interesting and it was from Belgium (let’s call this another successful round of Belgian Beer Roulette). Now I’m going to have to head back to State Line Liquors and stock up on some more Alvinne treats.