I don’t typically think of the Trappists as being trendy, but here they are, barrel aging their beer. Of course, barrel aging beer isn’t a new thing at all, and the Trappists over at Koningshoeven were using barrels back in the late 19th century. Well, they recently decided to restore that tradition and since I’m a total sucker for this sort of treatment, here we are.

The base beer they used was their most excellent Quadrupel, and they’ve used a variety of different barrels throughout several batches. The bottle I got my hands on was from Batch 3, which featured a blend of beer aged in 3 different barrels:

At their website, they even list out the common flavors attributed to each type of barrel (at the bottom of the linked page). Ok, so let’s get this party started: 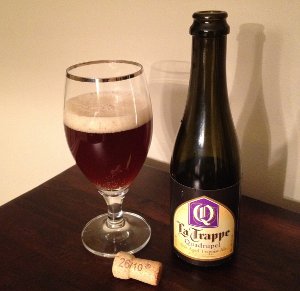 La Trappe Quadrupel Barrique (Oak Aged) – Batch 3 – Pours a cloudy (visible sediment), deep brown color with a finger of puffy head. The aroma is full of sweet, dark fruit (raisins are clear), bready Belgian yeast, and a sorta red wine-like character (which I suspect is from the port barrels). The taste starts sweet and spicy, complexity emerging in the middle with more pronounced fruit and some of that oak aged quality (vanilla and leather), and a boozy finish (again, wine-like flavors here, probably from the port). Mouthfeel is a little lighter on the carbonation than the regular Quad (less effervescent), but still rich and full bodied. Overall, a wonderful and complex take on an already great beer. A

These early batches seemed to favor port barrels and new barrels, but they apparently went through a phase of aging in white wine barrels and have since moved on to old scotch barrels with their latest batches. I’d love to catch up with some of those varieties as well. In fact, it seems like each batch is unique, so if I ever see these again, I’ll probably pick up another bottle…