This is one of those beers that I never thought I’d actually get to try, but whilst perusing the beer menu at a local establishment, it jumped out at me. Now, from what I’ve heard, this is an obscenely expensive beer in almost any case, and buying it from a bar… well, let’s just say that it’s probably not something I’ll do again. That being said, I’m really glad I got to try some and I can cross another beer off the white whale list.

I’d always thought that the base for this bourbon barrel aged beer was Brooklyn’s excellent Black Chocolate Stout, but apparently they tweak a different imperial stout recipe each year and, of course, barrel aging adds an additional variable to the process. The brewery sez it’s “aged for four months in bourbon barrels, bottled flat, and re-fermented in the bottle with Champagne yeast” which is at least a little strange. I get the impression that most bourbon barrel aged beers are not bottle conditioned, but I could be wrong about that. The selection of Champagne yeast is more unusual, though you do see it in very high ABV beers (regular brewers yeast can’t really tolerate high ABV, whilst Champagne yeast can). In theory, the bottle conditioning would make the beer more suitable for aging, though I greedily drank this one up less than a week from purchase… Anyway, enough nerding out about how the beer was produced, let’s drink this stuff: 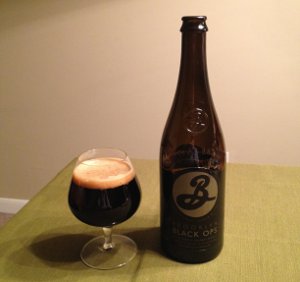 Brooklyn Black Ops 2011 – Pours black color with a couple fingers of light brown head. Smell is filled with chalky, roasted malt and bourbon. Taste prominently features that roasted malt along with just a bit of chocolate and tons of boozy bourbon emerging in the finish. The mouthfeel is a little light on the carbonation and smooth, but still very nice. Not quite as rich or full bodied as I’d expect, it still packs a big amount of flavor in a high medium body. Overall, an excellent bourbon barrel aged beer, but not quite reaching the heights of others I’ve had. Indeed, I might even like the regular Black Chocolate Stout better, but then, I’ve only had one of these and would gladly try more (though I don’t think I’d quite pay this much for one again). A-

I never have gotten around to trying out Brooklyn’s Local 2, which is something I’ve been wanting to drink for a while (and it’s readily available in this area too), and while I remember being disappointed by Sorachi Ace, I think it’s probably worth giving it another try (I drank it a few years ago and it didn’t do much for me)…