Damnation. No relation. Heh. Seriously, though, this is the bigger sister beer to Russian River’s Redemption (a light Belgian Pale “single” or “Patersbier”). Russian River is famous for their crazy barrel aging and sour beer experiments, but this is just a good old-fashioned Belgian Strong Pale Ale. Don’t let that fool you, though, as this is one fantastic beer. I’ve actually had it several times before, both in the bottle and on tap, and I’ve always loved it. 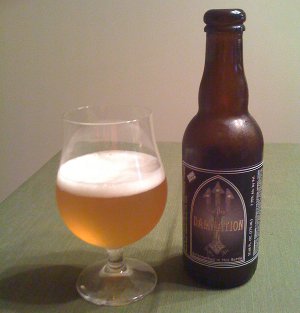 Russian River Damnation – Pours a slightly cloudy light golden color with a finger of white head. Aroma is full of Belgian yeast spiciness and plenty of citrus, maybe even some lemony sweetness. Taste has lots of sweet malts along with typical Belgian spiciness and again, an almost lemony sweet twang. Not exactly tart, but it’s there. Exceptionally well balanced flavors here. Complex, but no one element is overwhelming. Mouthfeel is on the light to medium side, which is interesting considering the strength of the brew. Perhaps if I didn’t wait so long to open this sucker, the carbonation would have been a little stronger (not that this is bad or inappropriate, just different than I remember from previous tastings). Overall, it’s a fantastic brew. I’ve had this several times before, and will most likely have it again. A-

Normally I would say that Russian River continues to impress, but I’m pretty sure that Damnation was actually the first Russian River beer I was ever able to get a hold of a couple years ago. It turns out that this is one of the easiest to find RR beers in the area (heck, my local Wegmans usually has some of this in stock), and it’s also relatively cheap (for a RR beer). Well worth trying out if you ever get a chance. I continue to devour whatever RR beer I can find, though at this point, I think I’ve managed to get my hands on most of the popular varieties (I think Salvation will be next on my list)…