I don’t know much about Belgian upstart brewers De Struise, but they certainly seem to enjoy a pretty good reputation. Unlike a lot of Belgian breweries, De Struise seems to have a wide and varied set of beers, including limited editions and barrel aged beers and the like. They also seem to do a lot of collaborations (indeed, my only exposure to De Struise thus far has been their collaborations with Stillwater). In this particular case, we have another beer aged in Islay Scotch casks (let’s hope this goes better than last time), so yeah, lots of smoky, peaty, almost medicinal flavors will be present. This time the base beer is De Struise’s Black Albert, a Russian Imperial Stout (there’s apparently a whole series of Black Damnation beers that put the Black Albert beer through a bunch of different treatments). Will it be able to stand up to the powerful Scotch flavors? Only one way to find out: 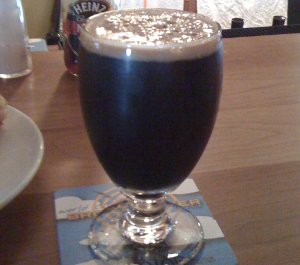 De Struise Black Damnation III – Black Mes – Aged on used Caol Ila barrels, the beer pours an opaque black color with a finger of creamy, light brown head. I’m not getting much out of the nose (probably a more a function of the full glass and bar atmosphere than the beer), but the taste is full of peaty Scotch flavors, finishing with a warming alcohol burn. The dark roasted malts are able to stand out a bit against the onslaught of peat, but it’s clearly a background character as opposed to something that is assertive in itself. The mouthfeel is not quite as rich as you’d expect, but it’s still quite full thanks to all that alcohol. Overall, it’s a good beer, but it is just a tad overwhelmed by peaty Scotch character. If, perhaps, I had a bottle of this, I have to wonder if it would mellow out after some aging… A worthy experiment, and something I might try again (if it’s ever made again and if I can afford it!) B

It was a bit expensive, but I’m glad I got to try this. I’m actually quite looking forward to the bottle of De Struise’s Pannepot that I recently acquired as well.