My sampling of this year’s seasonal beers has trended heavily towards the pumpkin side of things, but the other major seasonal style is the Märzen, more commonly known as the Oktoberfest beer. Back in the day, brewing during the hot summers was illegal, besides which, results were often poor as there was no real way to cool the brews, leading to bacterial infection and other nasty effects. So beers that were brewed in March (in German, Märzen) were kept in cellars and caves that were cooled with ice to last through the summer. From what I can understand, the modern style isn’t really that similar to the historical style (I wonder if any brewers actually brew their Oktoberfest beers in March?), but they all have a certain character that seems unique to the style. 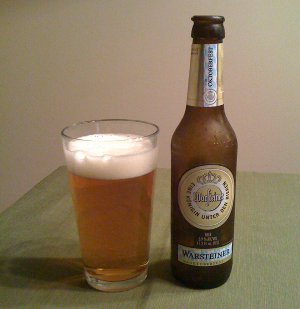 Warsteiner Premium Oktoberfest – Pours a golden yellow color with a finger or two of off white head. Aroma is malty and sweet, with a bit of a twang that I can’t quite place. Taste features the typical octoberfest maltiness along with some of that twang from the nose. The twang isn’t horrible, but it’s also not particularly doing anything for me either. I don’t really know what to make of this. It’s not horrible, but not particularly accomplished either. I’m not a huge fan of Oktoberfest beers, but I’ve had a lot of varieties that were better than this… C

I can’t say as though I’ve been particularly impressed with the Octoberfest style of beer. I’ve never had one that I’d consider great or transcendent, though I’ve had a few that would make worthy session beers.