In continuation of my seasonal, mostly-pumpkin beer binge, we’ve got another of the more (though not quite) sessionable versions of the style here: 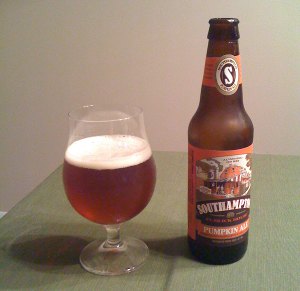 Southampton Pumpkin Ale – Pours a dark amberish orange color with a finger of head that quickly disappears. The smell seems to be more focused on the pumpkin itself than the spices, though they’re also there. The taste has a very nice balance to it. Sweet malts with just a little in the way of spice. But the real hero is the mouthfeel, which is very smooth, making for a very quaffable beer. Light bodied, but very flavorful, I really enjoyed this much more than I was expecting (and much more than the Dock Street beer I mentioned yesterday, which I described similarly, but which is distinctly inferior to this beer). When it comes to pumpkin beers, I don’t generally drink more than one in a session, but this would certainly work. Well played, Southampton. B+

Though I haven’t really gone crazy with it, I’m quite enjoying this fall season. I don’t know that it’s really my favorite season in terms of beer, but the beers made now certainly fit with the season very well, and I like how it’s almost a warm-up for my favorite seasonal beers, the winter and Christmas ales. I’ve got a few more seasonals, including at least one more Octoberfest/Marzen style (something I’ve been lacking this year), and we’ll see what the Beer Club peeps bring tomorrow night as well.