Russian River’s head brewer, Vinnie Cilurzo, is an interesting guy. He started out in the winemaking world, but was apparently so taken with the fact that you could start drinking beer within a few weeks of brewing that he switched over to beer (ok, it probably wasn’t that simple, but it sez so on this bottle of Supplication, so I’m sticking with that story). Perhaps to further taunt his winemaking brethren, Cilurzo started playing around with weird wild yeasts and bacterias when making his beers. Take Supplication, which is a brown ale aged in pinot noir barrels with cherries, brettanomyces, lactobacillus, and pediococcus. Those critters certainly add a nice, complex sourness to a beer that would already be pretty flavorful. They’re also an anathema to winemakers, who apparently think Cilurzo is a nutbag for using stuff like Brett. It’s rumored that those folks won’t even enter Russian River’s brewpubs for fear of picking up some sort of bug that they’ll inadvertently bring back to their winery, infecting their wine (apparently these are hearty little creatures that are difficult to get rid of).

The irony here is that this beer was aged for well over a year before being bottled, so it looks like Cilurzo hasn’t completely escaped his winemaking roots. But this series of beers that he’s created (all aged in old wine barrels of various styles) is quite interesting, and I have to wonder if we’ll see more coordinated wine and beer collaborations in the future (another brewery that mixes expertise from both the wine and beer worlds is apparently Firestone Walker, a brewery I need to become more acquainted with). Ok, enough babble, onto the beer: 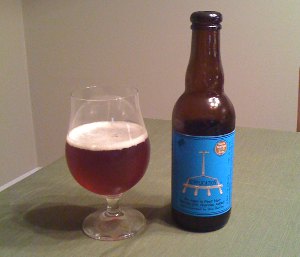 Russian River Supplication – The cork for this was really jammed in there. I normally don’t have any issues opening corked bottles of beer, but this one took some coaxing. Pours a really gorgeous clear amber brown (copper?) color with a finger of quickly disappearing white head. The smell is filled with sweetness and funk. You get some of that wine and cherry character along with the typical funky Brett aromas. Sourness hits immediately in the taste, followed by cherries and a dry, red-wine-like finish. The sourness is really the most prominent element here, but it’s well balanced with the other elements. Mouthfeel features the characteristic twang of sour beers, but it’s compulsively drinkable. A wonderful beer, probably favorite of Russian River’s sours (that I’ve tasted so far). A-

Well, I’m either getting the hang of this sour thing, or Supplication really is just that good. I will no doubt continue to dabble in the world of sour beers, though it doesn’t look like I have any in the pipeline right now, so it may be a while.