When Europeans made their way to the New World, one of the things they found was that many of the domesticated crops they relied on in the old world did not have native counterparts in the Americas. Because this is about beer, you can bet that one of these non-native crops was barley. It being in short supply, early American brewers, desperate for fermentable sugars, turned to other crops to make up the difference. Hard-up colonists used all sorts of gnarly stuff in place of malts, including molasses, corn, parsnips, spruce, and, of course, pumpkin. These early brews probably tasted nothing like today’s pumpkin beers, as they used no malt at all and probably didn’t feature the same sort of spicing we use these days.

Once barley and malt became more prevalent, pumpkin disappeared from breweries. It experienced a bit of a revival in the 19th century, but as a flavoring agent (as opposed to a full blown pumpkin beer). The conventional wisdom is that modern pumpkin beers began with Buffalo Bill’s Brewery in 1980, but I’m sure there are earlier examples that would approximate the style. In any case, Southern Tier’s Pumking is probably the best regarded of the pumpkin ales. Even those crotchety pumpkin-beer-haters I mentioned yesterday seem to enjoy this particular beer, so let’s see what’s got them so worked up: 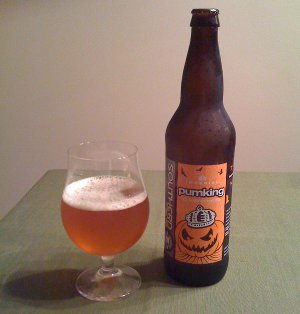 Southern Tier Pumking – Pouts a slightly cloudy golden orange color. Not much head at all, and it quickly dissapates. The nose is filled with a bready aroma (very familiar aroma, like pie crust) along with the typical pumpkin and spice characteristics that usually dominate. The taste is extremely well balanced. Sweet, pumpkiny, spicy, bready and it nails the finish. Mouthfeel is smooth and velvety. It’s not assertively carbonated, but it’s got enough body to work well. Overall, it’s certainly vying for the top of my Pumpkin beer rankings (not that I’m an expert). B+

More pumpkin and octoberfest beer posts are on their way, though they probably won’t start showing up until next week…