Pumpkin beers are an interesting and apparently divisive breed. Many folks seem to really dislike the style, or to at least think it’s a bit on the repetitive side. And it certainly can be repetitive: most make liberal use of standard pumpkin pie spicing like cinnamon, nutmeg, cloves, and ginger. Of course, one of the big challenges with this type of beer is that brewing with any kind of spice is really, really difficult. When it comes to hops, it’s easy. If you know the alpha acid content of the hops, there are simple measurements and calculations you can make, thus making it easy to balance the rest of the brew to match. Spices don’t have any such easy calculations and their potency varies greatly. This isn’t an excuse, but it also represents a big challenge to brewers and when done right, it adds subtle flavors and complexity without overwhelming. For pumpkin beers, though, subtlety is rarely the order of the day. Pumpkin itself doesn’t have a particularly strong flavor, but the typical spices are quite potent and can be overpowering. Which, I suppose, is why some folks are leery of the style. Personally, I like it, though I’m glad it’s confined to a seasonal exercise. 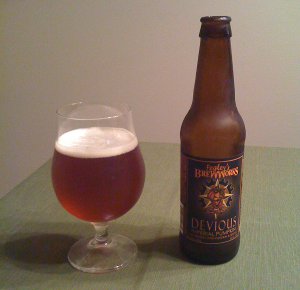 Fegley’s Brew Works Devious Imperial Pumpkin – Pours a mostly clear amber color with a finger of white head. Smell is pure pumpkin pie. Lots of spices – cinnamon, nutmeg, allspice, etc… Taste is very sweet and spicy along with some bracing booziness. The mouthfeel is well carbonated but still smooth and velvety. It leaves a nice sticky feeling in the finish too. Folks who dislike the tendency to over-spice pumpkin beers will certainly not enjoy this, but I’m having a good time with it. B

I’m many reviews behind at this point, but in the interest of seasonality, I’m skipping ahead to some of the more recent things I’ve drank (hopefully I’ll get back to the older ones later). I’ve got a few more seasonals lined up, and the blog is approaching its one year anniversary as well. I don’t have anything special planned, but, hey, maybe I’ll have a beer.