Every year, Weyberbacher brews an anniversary batch, often choosing a relatively obscure style. Past styles include a Wheatwine, a Smoked Imperial Stout, and a beer that utilizes a Calagione level of obscure spices. This year’s installment describes itself as a Dark Braggot Ale. Right, so what the hell is that? Apparently Braggot is a Welsh variety of mead, one which is brewed with a mixture of honey and malts along with hops. Well, don’t mind if I do: 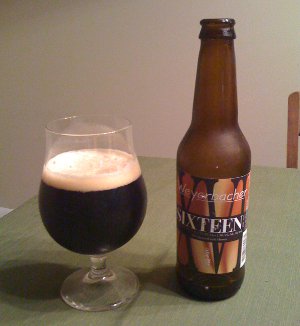 Weyerbacher Sixteen – Pours a very dark amber color, almost brown with a finger of light colored head. The nose is filled with the sweetness of fruity malts and honey. The taste has a very sweet pop in the middle and a really clean finish. Lots of fruity notes detected. No real aftertaste either, which is interesting. Well carbonated and medium bodied, you get a bit of alcohol burn, but it doesn’t overwhelm, instead giving the beer some additional character. Overall it’s a complex, unique and welcome change of pace for me. If I were a bigger fan of honey, I’d probably love this beer even more. A-

Given the dark color and high alcohol, I’d be interested in seeing how this stands up over time. It’s probably all gone by now, but if I see more, I’ll probably pick some up. Weyerbacher continues to be one of the more interesting local breweries. I don’t know that I’ve had anything revelatory from them, but they’re always interesting. That brand redesign they mentioned a few months ago needs to come soon. I mean, their logo is the woefully overused comic sans* text (with an underline). Comic Sans! Word on the street is that Greg at the Pour Curator interviewed them about the redesign a while back, but he has not posted it just yet. Will be curious to read it though.

* Incidentally, Russian River uses comic sans as well, though not in their branding. They should probably stop that too, though it’s not as distracting there.