In the past, I’ve attempted to separate the saison style into two main groups – sweet and spicy (a la Saison Dupont) and funky, tart saisons brewed with Brett (a la Fantôme). Of course, that’s a drastic simplification of a style that is extremely broad. One additional subcategory that you could argue for is dry saisons. I’ve had a few of these lately, and while I enjoy them, they tend to have a narrower range than the other subcategories. Dryness is a fine characteristic for a beer, and it’s actually really great to drink a nice, dry saison along with a meal. Dry beers complement what you’re eating well, while the sweeter beers may sometimes overpower your meal. Of course, the general guideline for matching beer with food is to match the intensity, but dry beers tend to work for a much wider range of dishes. But if you’re drinking a dry beer by itself, the dryness can make it a bit of a strange experience.

There is, of course, nothing wrong with any of this. There’s no one true style to rule them all, only a beer that’s good for you right now. Or something. Anyway, here’s a dry saison that’s garnered many accolades. 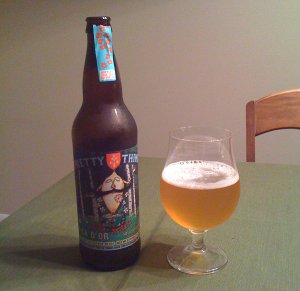 Pretty Things Jack D’Or – Pretty Things is another one of them Gypsy Brewers, like Mikkeller and Stillwater, and their beers have been highly sought after for a while, but I seem to be seeing them all over the place these days. This beer seems to use a ridiculous blend of malts, hops, and yeasts (I mean, seriously, how many beers do you know that are fermented with a blend of four different yeasts?) It pours a light yellowish gold color, mostly clear, with a finger or so of bubbly head. The aroma is surprisingly earthy, but not in a typical Belgian yeast way. The taste has some sweetness to it, but it’s mostly dominated by dryness throughout and especially in the finish, where things get a little bitter too. Actually reminds me a bit of Ommegang’s recent BID beer, as well as Stillwater’s various dry saisons. It’s light and crisp, and overall a pretty good brew. Not something that’s really lighting my world on fire, but I suspect I would enjoy it much more with a meal. B+

I’ve got a bottle of Pretty Things Baby Tree, a Belgian style quadrupel that I’m greatly looking forward to. These Gypsy brewers sure seem to know what they’re doing!