You know how no one knows what to call American Black Ales (aka India Dark Ale, Black IPA, Cascadian Dark Ale, etc…)? Well just imagine if this beer became a common style. of course, it’s Dogfish Head, so no one else will be trying this style – a mix between a Scotch Ale, a Brown Ale, and an IPA – anytime soon (BA calls it an American Brown Ale, which is probably the dominant element, so I guess that makes sense). 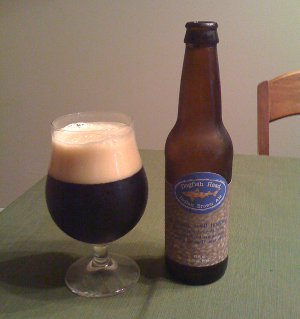 Dogfish Head Indian Brown Ale – Pours a very dark brown color with plenty of head. Nose is filled with roasted malt aromas and maybe even some coffee. Taste features that same roastiness coupled with a nice, bracing bitterness throughout the taste and in the aftertaste. The mouthfeel is surprisingly light (though still a medium body), with ample carbonation and a nice smooth feel. Very well crafted, but also not really in my wheelhouse. I’m giving it a B, but I have a feeling there are some folks out there who would go bonkers for this.

Despite the odd mish-mash of styles here, this is one of Dogfish Head’s “normal” year-round brews. There are actually a few of those that I haven’t had before, so you may see a few more in the near future. And probably some extreme brews, because the first batch of 120 Minute IPA in a few years is coming out soon. And I think I have a bottle of Squall IPA around somewhere too…