Ok, fair warning, this post is gonna get weird if you don’t know or care about fantasy sports. If there was such a thing as Fantasy Brewery, where do you think The Bruery would be drafted? I guess much of this depends on the details of such a league. Do you draft individual beers, or whole breweries? What are they measured on? Sales? Quality? How would you determine quality? Do you have a rotisserie league where beers are evaluated on a number of more objective measurements, like IBUs or ABV (dibs on Mikkeller 1000 IBU)?

Yeah, it’s a stupid idea. But I’d draft The Bruery. They may be small (which, depending on the details of such a league, may be a deal breaker), but every beer I’ve had from them has been excellent, and three of the four have absolutely blown me away, including: 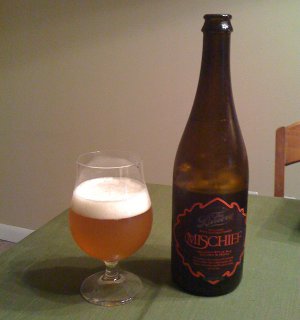 The Bruery Mischief – Pours a pretty golden orange color with a finger or two of white, fluffy head. Smells fantastic. Citrus and floral hops, bready Belgian yeast, and a sugary aroma to cap things off. Taste starts sweet and a pleasant and crisp hoppy bitterness appears midway through the taste, lingering beyond the finish. The taste is quite complex, but not overpowering in any way. It’s hoppy, but not as much as an IPA or DIPA (indeed, it’s only 35 IBUs – just a hair less than Sierra Nevada Pale Ale, and given the higher alcohol/sweetness of Mischief, I suspect that’s a bit misleading). It’s sweet and tasty, but not sticky or cloying. It’s a medium bodied beer but that’s a good thing in a refreshing pale ale like this. This is a great beer. I usually don’t go in for hoppy Belgian-style beers, but this one is very well balanced and unique. Another homerun from the Bruery. A

I’ve got a bottle of Saison Rue sitting my my shelf that I’m hoping to get to soon, and I’m hoping my local bottle shop will still have a bottle or two of Coton sitting around as well (I’ve had it before, and it’s superb. In the words of the guy who sold it to me: “It’s really good. Boozy, but good.”)