So I’m catching up on a bunch of beers I’ve had recently. I usually jot down some notes whilst drinking, then polish them up later (and maybe throw in a movie review or write a screenplay or something), but I’ve been slacking on the polishing piece, so I’ve got about 5 more posts ready to go here. First up, one of the more common Belgian beers you’ll find in the US: 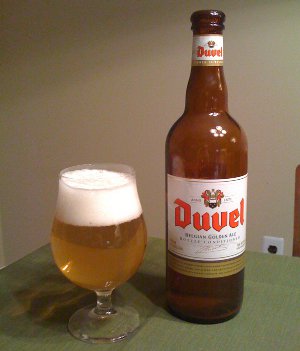 Duvel – My true gateway into the world of craft beers was Brewery Ommegang, which was sold to Duvel Moortgat in 2003. Back in the day, I got me a case of Duvel, expecting something… Ommegangy, but I remember being a bit disappointed. It was better than most of the swill I was used to, but it wasn’t a revelation, like the Ommegang beers I’d had at the time. But that was a solid 6 or 7 years ago, so I figure it’s worth giving them another shot.

It pours a light, clear yellow/gold color with a billowy head and lots of lacing as I drink. It’s very aromatic and smells strongly of Belgian yeast, cloves, etc… Taste is very sweet with an unexpected tart finish. Hints of a lingering tart bitterness as well. Mouthfeel is a bit on the harsh side, lots of carbonation. It has a bit of a bite to it, no doubt due to the lemony tartness, but is otherwise not quite as complex as I was hoping for… It works well enough for one glass, but the entire 750ml bottle was a bit much for me and it was grating towards the end. It’s a fine beer, certainly a step up from something like, say, Stella (and a mile up from typical macro junk), but I think my initial impression way back when was probably right on. B-

I didn’t realize it, but I had another beer from Duvel Moortgat in my fridge (Maredsous 8, a dubbel), which I’ll be reviewing sometime this week. I liked that one better than this, but it wasn’t particularly mindblowing either.