I’m still making my way through 2010 movie releases, hoping to find a final gem in the rough so that I can complete a top 10, and the process is, of course, made much more fun by the imbibing of good beer! I recently caught up with The Last Exorcism and was quite pleasantly surprised. It’s not really a top 10 kinda movie, but it’s a lot better than the marketing for the film would have you believe. I don’t really want to ruin anything, but it takes the form of a mock documentary with an effective setup and conflict, though I think the resolution isn’t as satisfying as it wants to be. Still, well worth checking out for fans of horror (it’s certainly better than most recent exorcism-themed film). Perhaps it helped that I was drinking some great beer whilst watching: 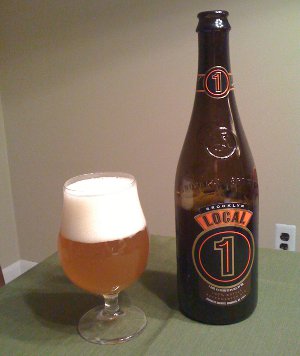 Brooklyn Local 1 – Pours a light, cloudy yellow/orange color with a big head that leaves some lacing as I drink. Smells fantastic – bready belgian yeast, some candi-sweetness, and lots of citrus in the nose. Sweet and spicy with a bit of a kick in the middle and a nice dry finish. A little bitterness lingers… Mouthfeel is strongly carbonated and a bit harsh, but in a good way. A lot of this reminds me of a good Belgian tripel style beer, though BA classifies it as a Belgian Strong Pale Ale. I suppose there’s a good reason for the classification that has to do with ingredients and brewing methods, but in terms of tasting this is certainly more like a tripel than the last two tripels I’ve had (Incubus and Weyerbacher Merry Monks (not reviewed yet)). All of which is to say, this is a great beer. A-

I guess this means I should try Local 2 (apparently a strong dark ale), eh?