There’s been some discussions in the beer blogosphere lately about Elitism and Approachability. The question posed by Zak Avery (in the first link) is what constitutes elitism in beer? Now, I’m relatively new to the whole beer blogging word, but I get the impression that Zak takes some gruff for seeking out, drinking, and writing about obscure or hard-to-find beers.

I see this sort of thing a lot. Many beer bloggers seem to write about things that are only available in limited quantities or in a certain region of the country or whatnot. This can be frustrating in that the beers sound great and yet are not easily available to me. However, I certainly don’t find that sort of thing “elitist”. Drink what you like. Even if it’s something I don’t care for, I won’t hold it against you. And I think that’s the rub. Elitism isn’t about what you drink or write about, it’s about how you perceive others. If ever get my hands on a bottle of, say, Westy 12, that might make me a big beer nerd, but it doesn’t make me “better” than anyone, nor does it qualify me to make judgements on others based on their not having had such a rare beer.

Approachability is a different beast altogether. In his post, Tandleman shares his anecdotal experience at a pub that serves a low ABV pale ale and a higher ABV hop-bomb. Most “ordinary” drinkers aren’t looking to have their mouth set on fire by a hop bomb, they just want something that tastes good. In my own anecdotal experience, I’ve found hoppy beers to be a hard sell most of the time. My brother, for instance, doesn’t even like the standard Sierra Nevada Pale Ale. Even among my beer loving friends, some aren’t big fans of hoppy beers.

I can see how this could lead to some confusion about elitism though. If a beer geek like myself tells someone that they might not like HopDevil (or whatever) because it’s quite bitter, they might think me a bit of an elitist, depending on how I worded it. I suppose the sensitive among us would feel a bit awkward about drinking what they like when I’m trying to find the most interesting beer on the menu. Does that make me a snob? Maybe, but so long as I’m not belittling you for drinking a Lager, I’m probably not elitist either.

I’d wager that the same confusion exists in other fields. Take, for instance, movies. Elitism certainly exists there, but only because there are a lot of high-falutin movie-nerds that think that anyone who likes Hollywood movies are sheep. And the more you dig into the world, the more obscure and weird things get. After a while, liking Kurosawa isn’t good enough for some people, you have to be a full fledged Ozu addict if you want to be considered a movie lover. This isn’t to say that Ozu is bad or anything – indeed most film lovers probably should check out some of his work – but the notion that you can’t be a film lover if you haven’t seen Tokyo Story or Floating Weeds is kinda silly.

Stan Hieronymus has an interesting post on the subject, where he references categories in the wine world. Stan notes that it’s probably not a direct translation to beer, but there are some things to be learned about. The first four categories are pretty straightforward:

Overwhelmed, 23%, buy wine but don’t know anything about it

That leaves two categories: Image seekers (20%), and Enthusiasts (12%). The former spend the most money on wine; the latter expend the most verbiage on it. These are the only two who care enough about wine to read articles or blog posts about it.

Image Seekers are obsessed with quality and will pay through the nose to get even a minor increase in quality. Enthusiasts are all about “interesting” and experimental offerings. And apparently those two groups are at each others throats in the wine world. As Stan notes, things are a bit more relaxed in the beer world, which is a good thing (and perhaps the worries about elitism aren’t as big a deal as everyone’s saying).

I suppose, technically, I fall under the Enthusiast category, though I certainly have leanings towards the Image/Quality seeker as well. I suspect that is mostly because I’m relatively new to this whole thing and thus am a little comfortable spending a lot on beer. I still hesitate to spend more than $20 on a single bottle, but for now, I’m ok dropping some money on something as interesting as The Bruery’s Coton, for instance. I suspect I will settle into a more strict Enthusiast in a couple of years. My guess is that if you graph quality versus cost, you’ll get an asymptote. Assuming that my idea of quality could be quantified (which it probably can’t), there’d be a limit to what is practically achievable from a cost standpoint. At a certain point, moving up the curve becomes so costly that the minute gains wouldn’t be worth it.

Until then, I’m going to seek out and try new and novel beers. Of course, what is new and novel to me might be old hat to someone else, but that’s ok. We’re not elitists here, right? Anyway, last weekend I tried my first sour since starting the blog. I suppose I’ve had some others before (does Fantome count?), but I’ve never had a Gueuze before: 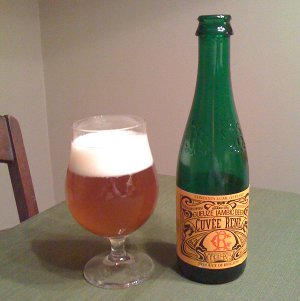 Lindemans Gueuze Cuvée René – Pours a golden orange color with a good sized, light colored head. Smell is kinda like a musty white wine. There’s some typical belgian yeastiness in the nose, but it’s overpowered by the white wine character. The taste starts off sweet, but that quickly yields to an intense sourness. The finish is dry and tart. As I drink, it strikes me as a more intense version of champagne. The carbonated mouthfeel is probably a big part of that. It’s not something I’m particularly a huge fan of, but I would like to explore various sour styles as well. B-

Sometimes I worry about my beer tastes becoming too reliant on novelty. It’s certainly fun trying something new all the time, but at some point, this has to run out right? That, or I’ll end up playing with Lemerchand’s Box and disappearing or something (hopefully not).