Has this happened to you? Maybe you stumbled upon a no-name brewpub somewhere and found the perfect pale ale. Maybe, buried in the back of your local beer store, you found a dusty bottle of rare barleywine. Perhaps a friend turned you on to a beer that changed your mind about a brewery or a style. Write about a beer experience that took you by surprise.

Indeed, I’ve already hinted at my discovery… There was this bar/restaurant in the gleaming metropolis of Norristown, PA called the Moody Monkey. A bunch of friends and I went there for dinner one night and were pleasantly surprised to see a huge beer selection. We were just out of college at the time, and thus were used to the joys of Natty Light and the like, so when handed a gigantic beer menu, we were pretty much lost. Since we had no idea what to order, we opened the menu, closed our eyes, and randomly pointed at the menu. As it turns out, two of us, purely by chance, had selected Ommegang’s Hennepin. It came out in the 750 ml bottle, caged and corked, and pretty much blew our minds. I’d never seen anything like that at the time. When I poured it out, it looked kinda like a “regular” beer, but the taste blew my mind once again. It was a revelation, and while not really my first experience with craft beer, it was the most influential. From that point on, I was ready to explore the beer world, and went out of my way to find other Ommegang brews and I’d always try something new whenever I could. Alas, the Moody Monkey fell on hard times not long after my discovery of Ommegang. I don’t know why, but apparently the owner “forgot” to renew the liquor license, and all of the sudden that fantastic beer selection was gone and it wasn’t long after that that the place had to close down.

But I never forgot Ommegang, and have gone out of my way to find and try every Ommegang beer I could. This was several years ago, and in PA, it’s hard to find places that would sell single bottles of stuff, so I had to buy full cases. I remember paying through the nose, sight unseen (or tasted), for Three Philosophers when it first came out. And I’ve never been disappointed. While I’ve since come to expand my horizons and try all sorts of other beers from other brewers, Ommegang remains one of my favorites (if not my absolute favorite). There was a time, though, where it seemed like the brewery had stalled a bit. They had their usual stable of fantastic year-round brews, but their specialty/seasonal beers were somewhat rare. Lately, they’ve been doing more specialty/seasonal brews though, and tonight, in honor of my original discovery of Ommegang, I decided to try something new: 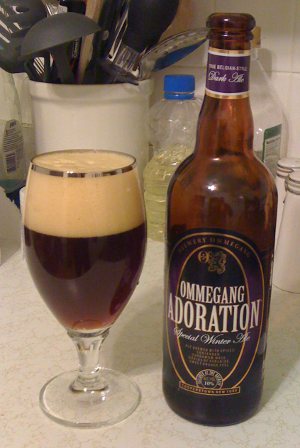 Ommegang Adoration Ale – Ommegang’s first holiday ale, a belgian strong dark ale with unusual holiday spices. Pours a deep, cloudy brown (maybe a little red), with a solid head. A little lacing, but not a lot. Smells fantastic. Sweet and spicy, with prominent coriander (apparently a favorite spice of mine) and maybe some yeasty aromas. Taste starts sweet and spicy (again with the coriander), with some fruitiness apparent. Suprisingly drinkable considering the high ABV. Solid carbonation, with a bit of a bite, but I enjoy that sort of thing. It’s a complex beer with lots of flavors, but for something that’s not very subtle, it’s pretty well balanced. It’s not quite perfect, but it’s in the top tier of Ommegang’s offerings, which is nothing to sneeze at… A-

So yet another well balanced Ommegang brew that I’m most likely going to fall back on every year (like I do with a bunch of other Ommegang brews). I’ve also recently come into possession of Ommegang’s Tripel Perfection, which I’ll probably get to soon (look for a post, probably in January).