Despite a recent disappointment from Yards, I went ahead and picked up a pair of their Ales of the Revolution. As I mentioned before, I’m kinda a sucker for local beers and this series, based on recipes of our founding fathers, is particularly intriguing. I drank them whilst watching the second half of last weekend’s double feature (sadly, movie theaters around here generally frown upon the drinking of alcohol during the show – perhaps someday, we’ll get an Alamo Drafthouse or something similar). Winter’s Bone is a very good movie, but not exactly fun drinking material. Nevertheless, I found myself enjoying both of these brews: 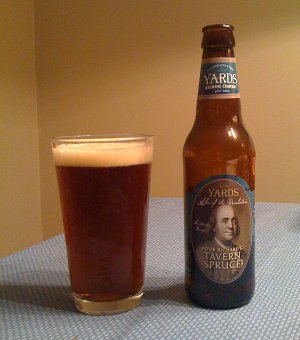 Poor Richard’s Tavern Spruce Ale – As legend has it, when Ben Franklin learned that barley and hops were not very plentiful, he attempted to bypass the shortages by leveraging spruce and molasses (I have no idea bout the proportions here, but whatever). It pours a dark amber color, mostly (but not entirely) clear, with a thin head. Smell is a little spicy and malty, though not super strong. Taste is a bit spicy (apparently that’s the spruce), but otherwise it tastes like a pretty standard amber ale. Would have perhaps liked a bit more maltiness in the taste, but it’s got an excellent, very drinkable mouthfeel. It reminds me a little of Yuengling Lager, but with a little more spiciness (which is a good thing, in my book). I could drink these all night, and at 5%, that would work really well. It’s not blowing me away, but it’s better than most of the offerings I’ve had from Yards and would make a fantastic session beer. B+ 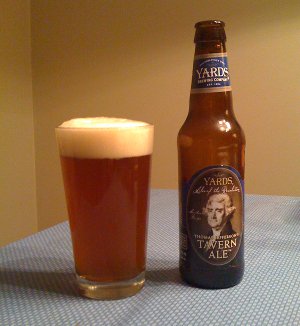 Thomas Jefferson’s Tavern Ale – Pours a lighter amber color, mostly (but not entirely) clear, with a solid head. Smell is a bit muted here, not much going on in the nose. Taste is sweet, boozy and spicy, an interesting mix. Carbonation isn’t as strong here, perhaps because of the high alcohol content, which seems to be the dominant characteristic of this. It’s not really appropriate to call it oily, but that word does come to mind (perhaps that lack of carbonation contributed to an oily mouthfeel). Neverthless, I like it. It’s probably not something I want to drink a lot of, but there’s something unique about the beer. Flawed, perhaps, but still an interesting experiment. There are rumors of a Bourbon Barrel Aged version of this beer, and given the high alcohol content, I think the addition of rich flavors imparted by such a process would suit this beer well. B

So a good showing for Yards this week. Now I just need to find me a bottle of George Washington’s Tavern Porter and Alexander Hamilton’s Federalist Ale (this one seems a bit rarer than the others, though it appears to be in the variety pack). And of course, if I come across the Bourbon Barrel Aged versions, I’ll have to try those too.

2 thoughts on “Double Feature: Ales of the Revolution”