Take a peek out of the venetian blinds, grab yourself a trench coat and a fedora, cuz it looks like a femme fatale’s on her way to your office with tales of a dead body in a farmhouse where they just happen to make beer. Alright, so “noir” is just French for “black” and this is a dark saison, but come on, noir movies are fun. And hey, isn’t that a maltese falcon on the label? Probably not, but give me this. It turns out that this beer, a funky saison made with dark malts and oats and fermented in oak, is actually a component in the blended Love’s Armour, which just happens to be my first Sante Adairius beer ever, so let’s dig into this mystery. 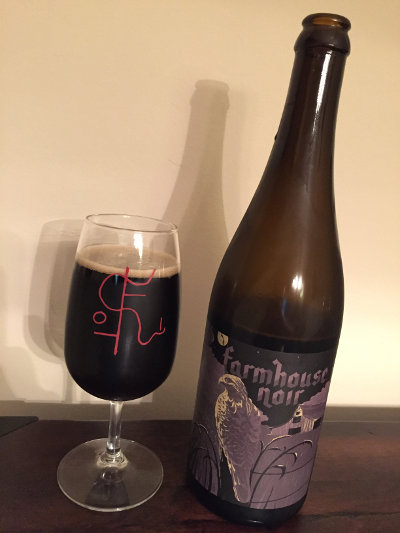 Sante Adairius Farmhouse Noir – Pours a dark brown color with a finger of light tan head, almost like a porter or stout. Does not smell like a porter or stout though, lots of funk, tart fruit, maybe a little chocolate. Taste even incorporates faint hints of spice up front until that funky earth and tart, chocolate covered fruit kicks in, lemons, cherries, sour finish. Mouthfeel is well carbonated, medium bodied, moderate to high sourness that still goes down easy. Overall, as dark saisons go, this is a pretty fabulous example and I might be inclined to like the style more if they made them like this. B+

Sante Adairius remains on the list of top brewers of farmhouse glory in the country, so I’m sure this won’t be the last we hear from them on this blog. Alas, current reserves are dry, so it may be a while…

In the before time, the long long ago, beers would be referred to by the price per hogshead. This was widespread practice, but Scottish Ales are still referred to by their Shilling categories, even after Shillings became an obsolete form of currency. 90 Shilling was generally the Scotch Ale/Wee Heavy designation, so I’m not sure what 88 Shilling means, but hey, it seems close enough. Also a pretty sweet price for 50+ Imperial Gallons of beer, but then, inflation is a bitch. Brewed in South Florida and aged in bourbon barrels for 13 months (usually hard to tell how long is best for beer and many other factors are involved, but 13 months seems like more than most, and I know that sometimes those extra few months make a big difference…), let’s take a closer look at this one: 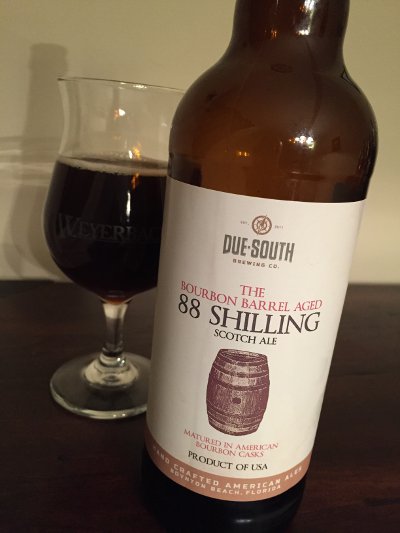 Due South The Bourbon Barrel Aged 88 Shilling – Pours a dark brown color with copper highlights and a finger of short-lived off white head. Smells of toffee, caramel, dark fruit, and just a little of the bourbon, oak, and vanilla trinity. Taste is a little less impressive, feinting towards rich caramel but not fully following through as the flavors drop out into a more fruity malt character, with the bourbon and oak pitching in and doing their best, but not quite elevating this to where it needs to be. Mouthfeel is medium bodied, a little thinner than expected for a BBA beer, appropriate carbonation, maybe even a little dry (which may be the culprit here, even if it’s still very nice), quite approachable actually. Overall, it’s a good, solid beer, but it’s not a top tier Scotch Ale. B

Solid stuff. Many thanks to Kaedrin beverage compatriot Steve for slinging this my way. We’ll probably be seeing more South Florida beers if Steve has anything to say about it (I’m looking at you, Funky Buddha!)

I’m not entirely convinced by the whole beer coctail craze – beer is good all by itself, thanks – but I have to admit, this does sound pretty good:

I’m a little surprised that I’ve not reviewed Golden Monkey on the blog yet, a situation that will have to be rectified soon. But this coctail does sound pretty interesting. Orange juice seems like a really nice match to the spiced Belgian tripel style that Golden Monkey falls into, and the sparkling wine would give it an extra efferfescence. Sounds like a great brunch drink, and a nice alternative to the bloody mary (a drink I’ve never quite been able to get behind).