Once upon a blog, I used to really hit the holiday beers hard. And yeah, I wrote about a few of them recently, but this year, I kinda reserved all these beers for the actual holiday itself. Alas, it seems silly to be writing about some of this stuff after the holiday has passed, so I’ll just lump it all together and call it a season. First up, a beer I should have drank on December 23: 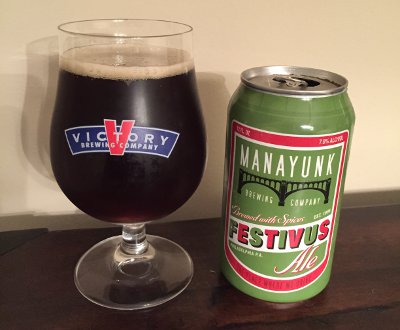 Manayunk Festivus 2014 – Man, I haven’t been to the Manayunk brewpub in probably a decade. It’s not a place I’ve ever been particularly in love with, but when you live near there, it’s convenient. Now they’ve started canning and distributing, and I have to admit, this holiday beer for the rest of us (or uh, you) makes me want to put up my aluminum pole, air some grievances, and conduct some feats of strength. But how’s the beer? Pours a deep dark brown with dark amber highlights and a finger of white head. Smells very unique, lots of brown sugar, plums, raisins, and some sort of spice that I cannot place (apparently: cardamom!) but which is definitely familiar. Taste is less intense than the nose implies, but it’s decent, a fruit and spice come through well in the middle and finish. Mouthfeel is on the lighter end of medium bodied, well carbed, a little bit of dry spice. Overall, an interesting and unique change of pace for the style, thus fitting for this singular holiday. B 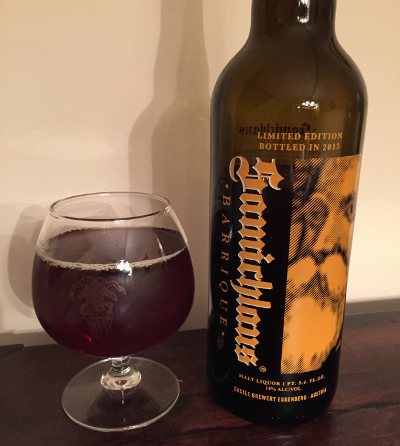 Samichlaus Barrique 2013 – Every Christmas Eve, I break open some vintage of Samichlaus as last minute wrapping fuel. Given the 14% ABV, it’s amazing that I don’t cut off a limb in a scissor mishap or label the presents wrong or something. I have vintages of this dating back to 2009, and of my experiments with aging, these have been among the best. This year, though, I took a flier on the Barrique variant, which is the standard Samichlaus (what with its already long 10 month conditioning stage) aged in German wine barrels (apparently Chardonnay) for an additional 5 weeks. I wasn’t quite sure how well this would work, but it turns out to be a really good idea. Pours a clear dark amber color with a bit of big bubbled head that quickly subsides. Smells of dark fruits, sticky sugar, and of course, booze. The taste is rich and sweet up front, lots of dark, vinous fruit flavors pepper the middle, and the booze hits pretty hard in the finish. The barrel character is not super strong, but I feel like it does take some of the bite out of the booze considering the young vintage (which is usually quite hot at this stage) and it contributes to a more well rounded mouthfeel. Speaking of which, this is rich, more carbonated than I remember from Samichlaus, but still very sticky, with a heaping helping of booze. Again, I feel like the barrel character maybe contributes a bit to the richness of the mouthfeel, though it’s not a huge impact. In general, it feels like the barrel aging smooths out some of the sharp edges of young Samichlaus. B+ but I’m wondering if age will treat this even better than the standard stuff. 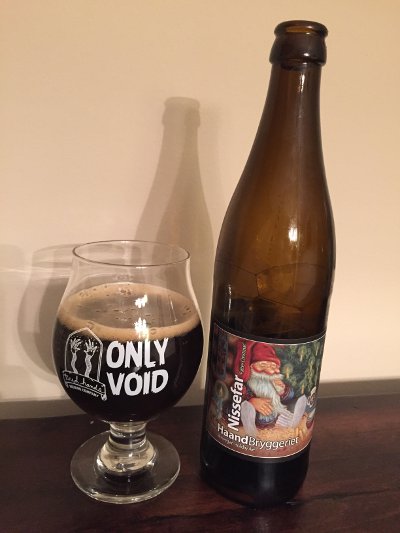 HaandBryggeriet Nissefar – We’re big fans of these Norwegians here at Kaedrin, and this beer, not particularly exciting on paper (a 7% Old Ale?), turns out to be possibly my favorite holiday beer of the year. Named after the Nisse, one of the many European precursors/contemporaries/versions of Santa Claus. A gift giver, but much more gnome-like in appearance. The beer itself pours a deep, dark brown with the barest hint of amber in the highlights and half a finger of light tan head. Smells faintly of dark fruit (plums and raisins), brown sugar, caramel, and maybe even some unidentifiable spice. Taste has a hearty malt backbone, some dark malts, dark chocolate, brown sugar, with more fruity notes emerging in the finish, which also throws up some bittering hops to dry things out a bit. Mouthfeel is on the lower end of full bodied, substantial but not a monster, with a very well matched, tight carbonation, and while I wouldn’t call this “dry”, it does veer in that direction towards the finish. Easier to drink than a sipping beer, but not really a chugger either, they’ve found a fine middle ground here. Overall, this is my kinda winter beer! Complex, well balanced, tasty. A- 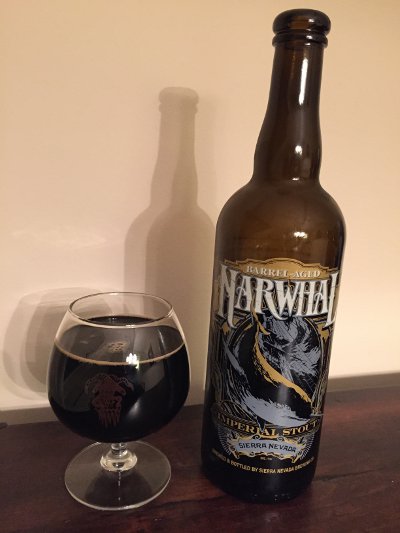 Sierra Nevada Barrel Aged Narwhal Imperial Stout – Narwhals are Christmassy, right? How about barrel aged Narwhals? Alright that’s pushing it, I guess, but this was my nightcap on Christmas night, and it was a nice one. Perhaps not quite the surprise that BA Bigfoot was, but it’s a solid BA stout. I didn’t really take extensive notes, but this was a pretty good, but standard take on the barrel aged imperial stout: dark color, tan head that quickly disappeared, nice barrel character with bourbon, vanilla and oak in both the nose and the taste, mellowing out some of the stronger roast character of the base stout, and leaving this with a nice caramel and chocolate character that worked very well. Perhaps not a top tier BA stout, but close. A-

And there you have it. We shall move on to regular fare soon enough, but I’m already thinking about taking a break again this year, like I did last year. That will probably be a few months away at this point because I have some great beer incoming, so stay tuned.