The mathematician Hari Seldon created The Foundation as a hedge against a dark age projected to last 30,000 years. If successful, the Foundation would limit said dark age to a mere 1,000 years. So goes the premise of Isaac Asimov’s Foundation series, which is clearly the inspiration behind the Portland, Maine brewery known as Foundation Brewing Company. Or not. But as has been amply established, I like to speculate on more nerdy origins of brewery and beer names than is often actually the case. Still, it’d be cool if, like, some dudes in Maine had a plan to minimize societal ills using their homebrewed psychohistorical methodology. (I’m trying my best, but I’m still an psychohistorical extract homebrewer.)

Um, yeah, anyway this particular beer is called Riverton Flyer, and is named after one of the first roller coasters in Maine (this one, at least, is not misinformed speculation, but a well established fact – even the label sez so!) It’s a German Pilsner brewed with Hallertau, Magnum, Tettnanger hops (a nice mix of noble and new-world). So let’s brush up on our psychohistory and see what this sucker looks like: 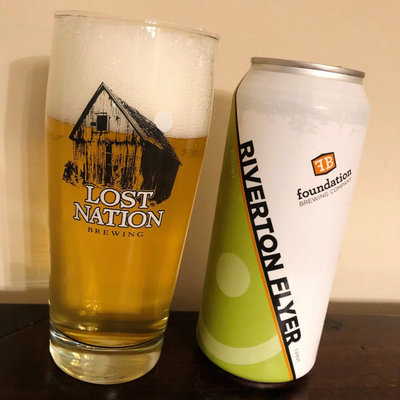 Foundation Riverton Flyer – Pours a clear straw yellow color with a couple fingers of fluffy, medium bubbled head that sticks around and leaves lacing. Smells a little bready with grassy, floral hops and a faint touch of citrus. Taste also has that breadiness with a more earthy, noble hop character, floral and spicy. Mouthfeel is light bodied, crisp, and clean, well carbed and quaffable. Overall, this is one damn fine pilsner and something I actually would like to try again. B+

I’ve been fortunate enough to try a couple of Foundation’s IPAs, pretty solid NEIPA stuff, but in the interest of occasionally talking up lagers, this is the one I chose to review. For now! Obviously interested in trying more from these folks, and one of these days, I need to get me up to main (Operation Lobster?)